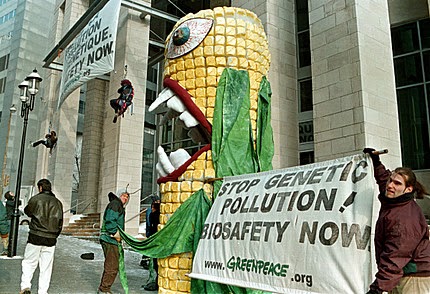 Back in the 1990s, an early fear of anti-GM campaigners was that the biotech industry would purposely create so much gene pollution in the fields and food chain that no matter how unwilling the public and regulators were to accept the novel technology, they would be forced to do so or starve.

Nearly 20 years on, the same concerns seem to be back in the limelight. But this time round, they're being raised by lawyers, with documentary proof to back them up.

The GM maize was sold to farmers and grown all over America.

Problems seem to have started in 2013 when China, which hadn't approved Viptera, started rejecting American corn exports contaminated with this GM trait. The Chinese, who have a burgeoning appetite for corn, started sourcing their supplies elsewhere.

With the loss of the huge export market to China, the price of corn dropped. Farmers who hadn't even grown Viptera were as affected as those who had. China's switch away from US corn is unlikely to be reversed, despite its approval of Viptera at the end of 2014.

The result is that Syngenta is being sued for loss of profits. Hundreds of farmers from 20 States, representing 86% of corn planted last year, have brought close to 800 lawsuits against the Company. Global giant corn-processors, Archer Daniels Midland, are also suing, and top US grain exporter, Cargill, has filed suit for $90 million.

This suit claims that Syngenta was aware of US trends against GMO products, and "embarked on a plan to purposely undermine U.S. non-GMO corn growers and those resistant to growing Syngenta's unapproved genetic corn traits. To that end, Defendants engaged in a scheme designed to inevitably taint and contaminate the U. S. Corn supply, effectively causing its economic vitality to be held hostage to MIR-162 trait GMO corn ..."

It is alleged that the scheme to persuade US farmers that resistance to GM corn was futile was carried out by a colluding network of Syngenta , and several of its subsidiaries, seed advisers, dealers and distributors.

Proof of the allegations comes in the form of mail fraud in the marketing of the GMO corn and news wire fraud in the dissemination of "false and misleading information and material omissions in public conference calls, press releases, articles and statements published over the news wires and interviews".

One lead attorney, previously involved in the litigation for US rice farmers' compensation following Bayer CropScience' historic gene pollution of global long-grain rice supplies, pointed out Syngenta's bottom line reality "they see that they have a profit opportunity that far surpasses their supposed legal exposure. If they can pay 2 to 3 to 4 billion dollars to the farmers for doing this but they stand to make 7, 8, 10 billion from the project, that's pretty easy math."

No doubt all the other biotech giants out there can do the maths as easily as Syngenta. Absurdities, such as the approval of GM grasses whose spread is intrinsically uncontrollable, suggest that US regulators may be in on the act too.

All the more reason to make it clear that the market (you) will not be held hostage to gene pollution. Like China, you will find other things to eat.