July 2015
A newly published study has shed a fascinating new light on the effect of crop domestication on the evolution of crop plants.

Analysis of the genome of the sweet potato revealed stable incorporation of functional DNA from a possibly ancestral species of bacterial plant pathogen, Agrobacterium rhizogenes. No such horizontal gene transfer was detected in wild relatives.

Sweet potato is one of the oldest domesticated crops and has been found in archaeological remains dating back 8,000-10,000 years.

The culture of neatly simple science 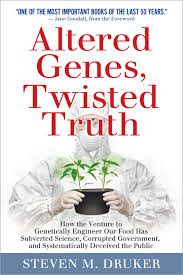 A book has just been published which describes the whole, sorry, history of "How the Venture to Genetic Engineer Our Food Has Subverted Science, Corrupted Government, and Systematically Deceived the Public".

Lawyer, Steve Druker, has cast a critical, analytical eye over the handling of GM by regulators, corporations, the media, prestigious institutions, and respected scientists, and has produced a very disturbing account.

In the conclusion of his investigation he asks the question who was ultimately responsible for the delinquencies and associated problems of the whole GM enterprise. His surprising answer is scientists.

Back in the 1970s, the public were already voicing concerns about the safety of GMOs. Anticipating that their research would become tied up in red tape, scientists convened three conferences ostensibly to evaluate the safety of GM. These meetings have since been used as proof of how responsible scientists are, and as a reassurance that scientists can safely be left to regulate themselves.

However, transcripts and interviews with participants of these meetings reveal a careful control over who attended them, how issues were discussed, and what information was disseminated. The focus was on how to persuade the "guys out there" that "there is nothing to worry about". Safety issues "tended to be factored out of consideration rather than confronted".

In 2000, 193 governments signed up to a moratorium created at the UN Convention on Biological Diversity which specified that Genetic Use Restriction Technologies (GURTS) would not be field tested nor commercialised.

The first GURTS were used to produce GM plants with sterile seed which farmers couldn't 'steal' to grow the next year's crop, and which provided very cost-effective in-built protection for industry patent rights. Concerns were raised, and never resolved, that the artificial fertility-damaging genes could spread into conventional crops and cripple yields.

Things went quiet for a while, but then terminator trees loomed over the horizon and, this year, the Brazilian government began to wrestle with idea of embracing crops with GURTS.

It's also emerging that some very fancy genetic systems for self-destruction are under development.

July 2015
The United States has ambitions for maize.

It expects, not only to maintain its global command of the supply of maize, but that the US share of the world trade in this commodity will grow to a massive 55%.

America also plans to continue to make maize indispensable to the modern life-style.

To understand the significance of this, consider that maize is now used extensively in personal care products such as deodorants, in pharmaceuticals such as aspirin and antibiotics, in adhesives, textiles and dyes, in chemicals such as solvents and acids, in agrichemicals, cardboard, fibreglass and the humble plastic carrier bag. All this is over and above its use as food and food additives (that means 25% of products in US grocery stores), as animal feed, and the 40% of the US maize crop mandated to ethanolic fuel production.

Despite such ambitions, the US agricultural system does not produce exceptional yields [1], nor is it conservative of environmental impact, nor apparently, is it sustainable. In fact, US maize in the field is "impressively vulnerable" to epidemic disease.

July 2015
How many random GM plants are kicking around in the food chain?

We've already had two indications of just how bad things might be. 'Starlink' Bt-insecticidal maize which was approved for animal feed only was found to be widespread in maize for human consumption after only two growing seasons, and later turned up in seven countries. Ten years after the first contamination alert, Starlink was found in Saudi Arabia. Two strains of experimental GM rice (one in China, one in America) which were grown in short trials over a very limited area nevertheless succeeded in contaminating global rice supplies.

Endocrine disrupting chemicals on the menu

EDCs can mimic, block or alter the level of hormones. Hormones are, of course, vital to many processes in the body. Their disturbance is harmful to health, and can cause irreversible damage at key stages of development.

Exposure to EDCs comes from their wide use in the manufacture of plastics, cosmetics, carpets, computers and construction materials. A special concern, however, is pesticides. Pesticidal chemicals are intimately present in our food, water and air, but despite this they've never been tested for endocrine-disrupting effects.

First off the planned production line in a few short years will be potatoes containing a stack of novel genes: three to combat late fungal blight, two to ward off nematode soil pests, two to switch off the production of sugars and an amino acid which together have a nasty habit of producing a toxic derivative when heated, and one to switch off the enzyme which turns raw potatoes black when they're bashed.

Future GM potatoes are planned which will have increased nutrients and which don't sprout in storage. Also under investigation are weird potatoes for industrial starch production and vaccines-in-a-spud.

Novel potatoes for biofuel production are not to be developed as these would compete for food-growing land and are not considered the socially-preferred option.

July 2015
Despite the World Health Organisation's conclusion that Roundup herbicide (active ingredient glyphosate) is a "probable carcinogen" [1], American's largest oat supplier, which supplies oats to General Mills, Kraft, Kelloggs etc., has announced it will continue to supply oats which have been sprayed with Roundup just prior to harvest.

The practice of 'drying down' a crop with Roundup makes harvesting quicker and easier.  It's also guaranteed to leave glyphosate residues absorbed into the crop.

General Mills fanfare over its 'non-GM' oat-based, breakfast cereal, Cheerios, [2] suddenly rings hollow: the sugar in Cheerios is now non-GM, but there's no such thing as GM oats and those we have are chock-full of a "probable carcinogen".

WHAT YOU CAN DO: start your day the organic way.