The apparently orchestrated media storm surrounding the GM wheat trial at the Rothamstead research facility near London (see THE MEDIA DEBACLE AROUND THE ROTHAMSTED GM WHEAT PICNIC-PROTEST - June 2012) led to a final summing-up article in the Guardian.

Like the GM-concern groups, the Guardian noted that, in contrast to past years, the media reporting and comment have been “mostly neutral and positive about the experiments, or actively hostile to the protester” and that the scientists involved have “adopted a new tactic”. It, too, asked “What has changed?”

The article went on to answer its own question. Seemingly, the researchers have adopted a new strategy of acting with “reason and openness”: they are coming “across as genuine in their desire simply to find out the answers” with a message to the activists “to discuss the issues rather than resort to criminal damage”.

To illustrate the new “reason and openness”, the author described how keen the scientists had been to 'point out' that “the risk of pollen from their wheat reaching surrounding crops is vanishingly small because the crop is self-fertilising”. Thus, the logic continued, the urgency claimed by the protesters to stop an open-air GM trial because it could have profound effects on the environment “simply did not exist”.

Is this true?
Read more »
No comments:

No patents on Rothamsted GM wheat? Or humbug?

The scientists who are testing GM wheat at Rothamsted research facility have pointed out that their research is publicly-funded and claim that the results will not be patented. The first part's true. You the tax-payer is paying them to create GM wheat whether you like it or not. But is the lack of intention to patent it real or just good PR?

The media debacle around the Rothamsted GM wheat picnic-protest

June 2012
Wheat has been genetically transformed to produce chemicals which aphids use to warn each other they're under attack, and that it's time to get out. The signal can also alert their predators. See GM WHEAT IN THE UK - July 2011

Anyone following the news during May 2012 can't have missed the fact that there's a GM wheat trial in the ground in Hertfordshire, and that there has been a protest against its presence.

The media storm was impressive:


“People will starve to death because of anti-GM zealotry”; the government must stand up to the 'anarchy and vandalism' and 'hatred' of science''; the protesters' actions are not only criminal but a “willful imposition of ignorance, directly comparable to Nazi book-burning” and an “assault on what remains of Castle Enlightenment”.

Who were these murderous, anarchic, vandalistic, science-hating, criminal, ignorant, Nazi, book-burning, unenlightened zealots? And, what did they actually do?

The music of life

June 2012
The popular term used to describe 'genes' is that they are a 'blueprint' of life.

Therefore, life is something which emerges from its genes with the precision of an architect's construction, or, of an engineer's machine.  And, this 'blueprint' can easily be altered by adding in or taking away a section.

In the 'blueprint' analogy, the DNA of which genes are made is linear, 4-bit, chemical code able to churn out instructions for the manufacture of the proteins which somehow become alive.  The role of the cell is a chemical factory in which the genes are the managers dictating which proteins roll off the production line.  With the 'blueprint' as its basis, cells are slaves to their genes, and exist whether they want to or not.  Indeed, man-made genes are constructed to have all the qualities of a dictator and are forced into the 'blueprint' in a military-style coup: they fit very comfortably and 'naturally' into this picture.

Realising that the 'blueprint' analogy is a bit too simplistic to describe something as obviously complex as life, a more sophisticated description presents genes as 'computer software' for generating proteins.  The chemical factory in this vision becomes a very high-tech, digital machine in which biotech DNA can sit with ease.

More imaginative analogies used to describe the role of DNA in life use music.
Read more »
No comments: 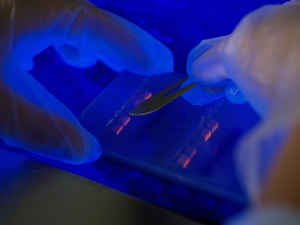