November 2016
Seemingly intent on promoting the future of GM crops in Europe, the European Commission (EC) is trying to extend the cultivation of GM maize.

November 2016
'Factory farming' just got a whole new meaning. It used to mean thousands of cows crammed in a muddy pen, or pigs living their lives out stuffed in crates, or tiers of chickens in boxes, all fed GM feed. Now it means farming in a factory. Farming, that is of microbes genetically transformed to produce food-like substances.

November 2016
The European Food Safety Authority (EFSA) has many fine words to say about the need for transparency in the science relating to GM safety issues, but it has some difficulty, it seems, in matching the words with action [1].

A recent EFSA Opinion on a multiple-stacked-trait GM for food and feed use was published on 26th August 2016, during the quiet European summer holiday period.

November 2016
Most of us have direct or indirect experience of allergy. For example: a skin or asthmatic reaction from clothes or bedding washed in certain detergents (no matter how well they've been rinsed); a reaction to perfumes or scented toiletries; digestive upsets from mass-produced breads and baked goods. These three very distinct classes of product have one thing in common: all of them are manufactured with novel industrial enzymes produced by GM microbes.

GM 'solutions' for the phosphate problem

November 2016
As governments and environmentalists worry about the pollution of our waters by phosphates pouring out of intensive pig and chicken farms, and worry about the dwindling supplies of phosphate needed for fertilizers and feed supplements, and worry about increasing human micronutrient deficiencies, genetic engineers have come with their own 'solutions'. 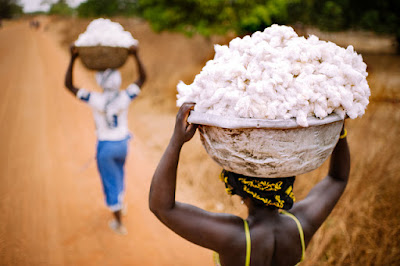 Burkino Faso has earned a global reputation for the quality of the cotton it produces. This has given the country a vital competitive advantage in the world cotton market.

Their secret is in their seeds, produced by a decades-long breeding programme which began during the French colonial era. This, coupled to hand-harvesting which keeps the fibres intact and retains their length and sturdiness, gives a high lint-yield per pound of raw cotton.

Cottonseed in Burkino Faso is controlled by three companies (the largest of which s state-owned), each operating in its own exclusive zone. The company provides seed and inputs on credit to farmers at the beginning of the growing season and then buys back the cotton at a fixed price at the end of the season. Farmers are spared the task of extracting seed for replanting, and are paid by weight for the cotton plus seeds.

This doesn't sound like the sort of scenario into which Monsanto's high-tech cotton varieties aimed at mechanised farming, royalties, contracts, and World Bank backing, are going to fit.

Feed me the truth

November 2016
Most people in the UK don't eat food made from GM ingredients, but supermarkets across the UK are selling products from GM-fed livestock with not a GM label in sight.

This means that, unwittingly, people are eating eggs, milk, dairy products, poultry, red meat and farmed fish from animals that have been fed GM soya and/or maize.

On the subject of the absent labels, one professor of food marketing told farmers "we find it convenient not to make a big noise about it".

It's time YOU made a big noise whether food marketers find it convenient or not.

Check out GM Freeze campaign at www.gmfreeze.org/feedmethetruth/ and demand to be FED THE TRUTH on GM animal feed in your food-chain.