Another neurotoxin to add to the mix 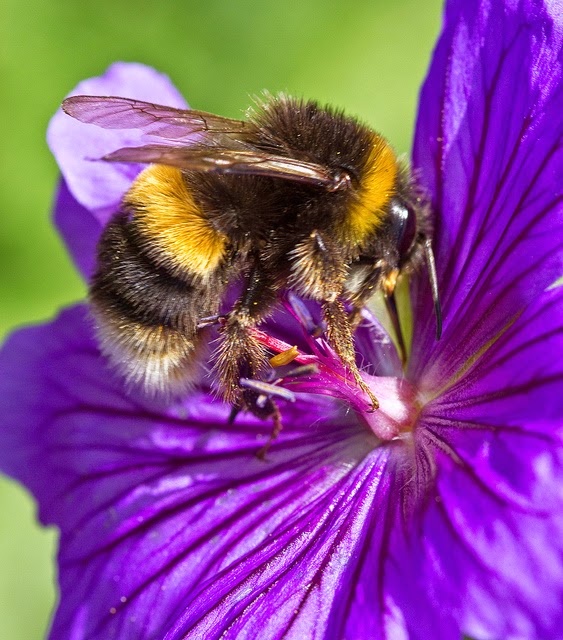 The possibility that neonicotinoid-type insecticides are contributing to the decline of insect pollinators is hotly contested by the agri-industry.

When bumble bees were fed the insecticide at low levels, as found in the nectar and pollen of the plants they forage on, there were clear signs of brain dysfunction. The poisoned bees exhibited learning difficulties and disruption to their ability to forage, accompanied by a decline in healthy brood cells and decimation (57%) of the total bee mass in the nest.

This shouldn't really come as a surprise because neonicotinoids are neurotoxins: their action is to disrupt the transmission of signals from one nerve cell to the next. Some neonicotinoids are also known to shut down the mitrochondria in brain cells. The mitochondria are cellular bodies which produce the energy for all biochemical processes. They're also involved in natural cell death. Mitochondria malfunction is bad news.

What's worse news is that the brain cells of our pollinators may be getting a double-whammy.

Besides neonicotinoids in their food, there's now glyphosate. Both these chemicals are neurotoxins [1] and both damage mitochondria.

And farm birds, also in steep decline, are susceptible too.

Poor pollinators, and hard luck birds. But what about us? Especially those of us unlucky enough to be eating unlabelled glyphosate-laced GM food?

Back in 2013, the European Food Safety Authority (EFSA) examined a new study from Japanese scientists on the effects of neonicotinoids on new-born rat brains. Rats are, of course, a common model for human physiology. The EFSA decided that some types of neonicotenoids "may adversely affect the development of neurons and brain structures associated with functions such as learning and memory. It concluded that some current guidance levels for acceptable exposure to (two specific neonicontenoids) may not be protective enough to safeguard against developmental neurotoxicity and should be reduced."

It looks like the birds and the bees have Parkinson's disease.

What you have to hope for now is that the EFSA's idea of a 'reduction' in allowable exposure is low enough for your brain to cope with, and that neonicotinoids and glyphosate aren't acting synergistically to make mush of our brains.

Or, better still, ask for the science to be done to investigate what happens when humans, birds and bees get two neurotoxins at once.