No science at all 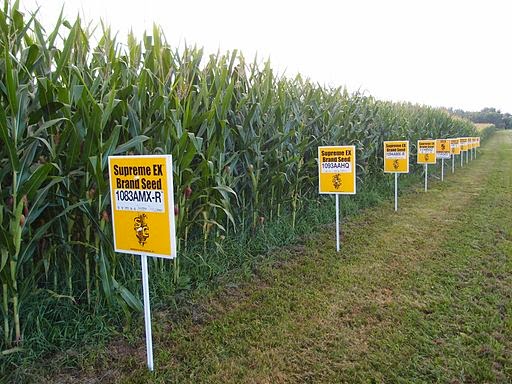 Questioning the validity of the "long list of 'scientific' objections" to Séralini's unique life-long GM feeding study, which found evidence of harm [1], South African scientist, Chris Viljoen, took a closer look at the quality of other published feeding studies.

Of the 16 papers on feeding glyphosate-resistant crops to test animals, Viljoen found that only three actually noted that the GM crop had been treated with glyphosate (active ingredient of Roundup herbicide). Of these three, only one noted the amount of the herbicide applied. One study noted that no glyphosate had been used on the test crop.

These are serious omissions.

Since GM glyphosate-resistant plants are designed to be used with, and to accumulate, the herbicide, glyphosate is an intrinsic part of them. Any safety study must, therefore, include the chemical. Besides possible toxic effects from the herbicide itself, its presence in the plants will alter their biochemical processes.

The major scientific issue as revealed by Viljoen was lack of repeatability: only one of the feeding studies was described in enough detail for others to check it out.

Validation by repetition is a requirement of accepted science. Yet, it was only Séralini's experiment, with its 'long list of objections' which noted the quantity of glyphosate to which the GM feed had been exposed.

This led GM-free Scotland to take a closer look at the two published studies which 'noted' glyphosate had been applied, but did not give the quantity.

Both papers were 90-day rat feeding experiments by Monsanto scientists. One was published in 2004 and involved Roundup Ready maize (NK603). The other was published in 2008 and involved a Bt insecticidal corn which was also Roundup-resistant (MON 88017). Both noted that the GM maize they were testing had been sprayed with glyphosate "at commercial application rates".

To appreciate how un-repeatable this makes the science consider that:
Whatever application rates the Monsanto scientists used on their GM crop, it seems to have been minimal, because the glyphosate content of the test maize fed to the rats was below the limit of detection.

Besides the lack of clarity about how the maize had been treated, some huge questions were evident about the possibility of confounding elements in the test and control diets of the rats.

In the 'Materials' section of both studies, the grain grown specially for "diet preparation" was analysed for nutrient components and for glyphosate. The test grains were then formulated by a lab-animal feed manufacturer into various feeds "nutritionally and compositionally comparable" to Certified Rodent Lab Diet 5002.

In the 'Results' section, the certified diet specifications are re-affirmed. The glyphosate level is re-affirmed as "below detection limits", but this latter seems to refer only to the test maize used to make the feed, not to the whole feed.

This is an important point because the second ingredient (after maize) of Rodent LabDiet 5002 is soya. The soya available to the lab-feed company was very likely to be GM Roundup Ready, and glyphosate-contaminated. Both the test and control diets may therefore have contained high back-ground levels of glyhposate.

Given that "there appears to be a growing body of evidence that Roundup may elicit toxicity in biological systems including mammals" (Viljoen), the possible presence of the herbicide in both test and control feeds may have disguised the presence of important physiological changes in the rats.

Note. In the 2004 Roundup Ready corn study, the test diet manufacturers produced feed with different concentrations of test maize by adding their own corn supplies to make the feeds comparable. Their own supplies were very likely to include Bt insecticidal GM maize. Varying proportions of possibly toxic background Bt maize could also confound the disease markers in the feeding study.

In case anyone is jumping to conclusions of Monsanto-bashing, it's not just biotech industry scientists nor older publications which suffer from this particular lack of methodological clarity.

The most recent (2013) herbicide-tolerant maize feeding study seems to suffer all the same deficiencies. This newer study tested a different artificial gene copied from a different bacterium and developed in China. No note was made of any glyphosate application to the new GM crop, and the rat diets formulated with GM and non-GM maize contained between 15 and over 27% (probably Roundup Ready) soya.

What we're presented with is a body of 'safety' science which, bar one, may not have tested the GM crop actually in the food chain, wasn't properly controlled, and can't be verified.

This is no science at all, and none of them should have passed peer review.


"on the grounds of methodology and controls, it will be necessary to repeat all the experiments on the safety of Roundup-tolerant GM crops, taking specifically into account the application of Roundup on test materials".


Another interesting question is raised in regard to the health of all the lab rats we've been depending on for 'safety' studies for the last couple of decades: has it been compromised by their standard lab-diet? Experimental integrity demands that the rats' physiology is not confounded by underlying ill-health. Most lab rats are used directly after weaning: but what were their parents, and two decades-worth of great-grandparents being fed?