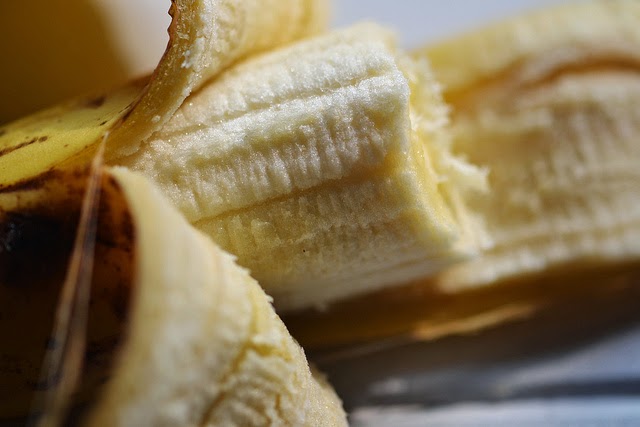 In August 2014, a touch of déjà vu led GM-free Scotland to comment that "the safety and efficacy questions (of golden GM bananas) are going to be by-passed in favour of ignoring scientific ethics and hyping the product, as it seems to be the case with golden rice" [1].

The excuse for copying a gene from one banana into another is that, apparently, "Residents of Uganda and nearby countries don't favour the type of sweet banana that naturally carries the extra beta-carotene. So researchers put the gene into a less-sweet type of banana that East Africans often use in cooking".

Unlike golden rice, the US researchers are trying to avoid the ethics scandal which broke over the surreptitious feeding of experimental GM rice to Chinese children.

Dr Wendy White and her team have ensured that their proposed materials and methods have approval from the Institutional Review Board Office of Responsible Research. However, the 'Level of Risk' and 'Rationale' behind their protocol is "this study presents minimal risk because the FDA (Food and Drug Administration) has deemed other genetically modified food as safe, and as such the general population is already consuming many genetically modified foods on a daily basis."

How convincing is this 'risk' assessment? Neither the approval of 'Bt' insecticidal GM maize nor herbicide-tolerant GM soya, nor the unmonitored consumption of both by the public would seem to have any relevance to a carotene-containing GM banana. The possibility of harmful carotene-related by-products or derivatives is nowhere, and the only risk identified is from the insertion of a syringe needle by a trained phlebotamist for taking blood samples.

Having dispensed with any considerations of health risks, Dr White's team turned its attention to the surrounding media coverage and a perceived risk that participants in the trial might become unduly alarmed or upset by it. However, the banana-eaters are to receive a reassuring information sheet telling them about the US FDA's 1992 policy that GM crops are "usually the same" as conventional equivalents, plus a comment from the ILSI (International Life Science Institute, a food industry lobby group) that novel toxins from a GMO are 'implausible', plus a 1991 statement by the WHO (World Health Organisation) that GM foods are not inherently less safe than conventional foods.

All of these statements are misleading, none are based on science, and actually the WHO says something rather different (see below.)

More interesting is the so-called 'news' coverage that spawned all this concern about media effects on participants in the first place.

In June 2014, we were told that 10 kilograms of GM bananas (that's about 70 unpeeled bananas) had been shipped from Australia (where they were developed and grown) to the US university where they were to be tested on humans. Project leader Professor James Dale said previous US trials using Mongoloan gerbils had already proved successful on the bananas .
(Note. Gerbils are a good animal model for human absorption and metabolism of carotene).

There's no sign of this previous trial in the scientific literature, unless Prof Dale is referring to a study he co-authored and published in 2012 which fed traditional high carotene bananas to gerbils.

In July 2014, we were told that bunches of GM bananas had arrived frozen in the US and volunteers were earning $900 apiece by eating the experimental food and giving blood samples. Prof. Dale had his public sedation speech all ready: "We know the ultimate compound, beta-carotene, that's not toxic, the gene comes out of bananas, that can't be toxic, people have been eating that for thousands of years".

August 2014 brought the news that over 500 women were dying to eat a GM banana (in return for $900) but that only twelve were getting that privilege. What the lucky twelve were to be fed was the equivalent of a banana (presumably the 10 kilograms of GM bananas were to be combined into a standardised dose, although why 10 kilos were needed to provide twelve banana-equivalents isn't obvious). Dr White got busy with her PR speech: "Wouldn't it be great if these bananas could prevent preschool kids from dying from diarrhoea, malaria or measles?", and took the public-sedation opportunity to mention that she had led a similar study a few years ago, with six women eating porridge made from corn that was altered (by conventional breeding, but she missed that bit out) to produce high levels of beta-carotene.

In November 2014, The Ecologist pointed out that the carotene-producing gene claimed by Dr. Dale to have been copied from a 'wild' banana actually came from a domesticated red banana cultivar, first noted in 1788 and developed over the centuries by indigenous farmers across Asia, Indonesia and the Pacific, where it is still popular. The gene is the rightful property of the nations and communities that developed it and its use by biotech engineers is a clear case of bio-piracy.

In December 2014, the AFSA (Alliance for Food Sovereignty in Africa) write to Dr. White and the Gates Foundation which has contributed $15 million to develop the 'super' bananas, denouncing the project because "These crops divert resources away from more locally appropriate and controlled agricultural solutions to nutritional concerns". It also spelled out the need for a diversified diet in areas where people suffer vitamin A deficiency, not the perpetuation of "monolithic diets". The AFSA demanded its letter be shared with the human subjects of the US trial.


"we have been eating homegrown GM-free bananas for centuries. This GM banana is an insult to our food, to our culture, to us as a nation, and we strongly condemn it".

In January 2015, the golden banana project suddenly lost its shine.

Despite the press 'reports', the feeding trial had never actually reached the starting post. Further information about the GM bananas continued to filter into the media, but became so patchy it made little sense.

The US university didn't know why, but rumour had it that there were shipping 'issues'. Prof. Dale indicated the banana 'material' was substandard and that shipping bananas from Australia to the US in good condition was a 'challenge'.
(Strange. Fresh or frozen, moving bananas around the globe is something we've been rather good at for decades.)

More tellingly, it is hoped that the trial will now go ahead by the middle of 2015.
(Is Dr. Dale having to wait for the next crop of GM bananas to be harvested? If so, it suggests they're not growing too well.)

On the subject of why ship the GM bananas half-way round the world in the first place, it seems Australia has no independent laboratory available to do the work.
(How onerous can a few vitamin A analyses be?)

Last but not least, back in July 2014, National Public Radio (NPR) pointed out the many regulatory and practical hurdles the GM fruit would have to jump. "For the banana to have any impact at all, governments would have to approve it, farmers would have to grow it, the ordinary people would have to be persuaded to eat orange-tinted bananas".
(Golden rice fell at all of these hurdles and has never got off the ground. What hope golden bananas?)

To summarise:
Vitamin A is highly biologically active in trace quantities and has multiple physiological functions (some of which we may not know about). Beta-carotene isn't toxic, but it's closely related to substances which are toxic. As US neurobiologist Dave Schubert put it " ... It's hard to predict how a gene from one plant will affect another plant. Plants can be really weird".

WHO Frequently Asked Questions on GM Food Safety (our emphases)

8. Are GM foods safe?
Different GM organisms include different genes inserted in different ways. This means that individual GM foods and their safety should be assessed on a case-by-case basis and that it is not possible to make general statements on the safety of all GM foods.

GM foods currently available on the international market have passed safety assessments and are not likely to present risks for human health. In addition, no effects on human health have been shown as a result of the consumption of such foods by the general population in the countries where they have been approved. Continuous application of safety assessments based on the Codex Alimentarius principles and, where appropriate, adequate post market monitoring, should form the basis for ensuring the safety of GM foods.
www.who.int/foodsafety/areas_work/food-technology/faq-genetically-modified-food/en/