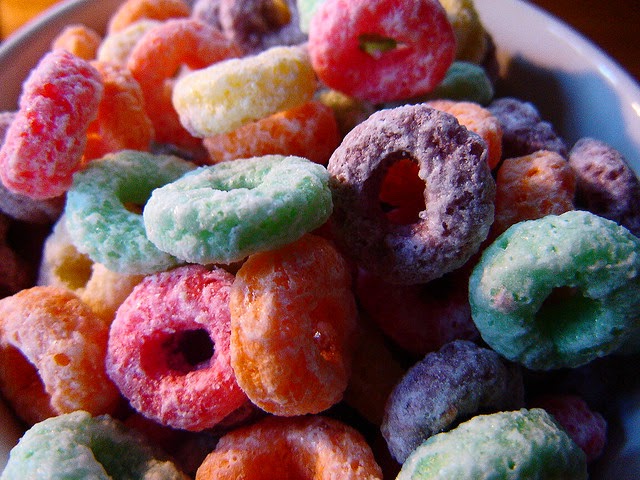 America's in a mess: a GM mess.

US paediatrician, Michelle Perro, tells us: "Digestive health is rapidly declining in children. If children eat conventionally grown food, they will potentially be eating glyphosate, pesticide ingredients and GMOs ... The bioaccumulation effects of gyphosate have not been addressed in children and the standards of safety are arbitrary and not based on any clinical evidence."

These concerns were raised after GMO Free USA published the results of independent laboratory testing which found high levels of Bt insecticidal GM corn and the presence of glyphosate herbicide (used increasingly on GM) corn in Kellogg's 'Froot Loops'.

Froot Loops are a breakfast cereal aimed at children. They are "Packed with delicious fruity taste, fruity aroma, and bright colors. Made with whole grains and lightly sweetened, Froot Loops is a fun part of a complete breakfast, and is a good source of fiber" (Kelloggs US).

It seems a "complete breakfast" US-style* contains unidentified flavours with a smell, artificial colours, GM insecticidal proteins copied from a bacterium, and weed-killer.

*Note that the ingredients of the UK version are different

Paying heed to the warnings of an impending public health disaster since the US Environmental Protection Agency (EPA) approved GM corn and soya resistant not only to glyphosate but to 2,4-D (an older herbicide) as well, GMO Free USA is planning to start testing for both herbicides (and a few other suspect agrichemicals as well).

2,4-D (an ingredient of Agent Orange defoliant used during the Vietnam war and still causing disease there) has well-documented toxicity for farm workers. EPA-sponsored studies have shown increasing risk of Parkinson's disease, cancer and birth defects after repeated exposure. These problems are now also being linked to glyphosate [1,2,3,4,5].

Both glyphosate and 2,4-D together sounds, indeed, like a public health disaster.

And are US citizens fighting back?

You bet they are. Zen Honeycutt, founder of 'Moms Across America' which raised the alarm over glyphosate in breastmilk [6] decided to take on Monsanto, and won!

At a shareholders meeting, she demanded a vote on a call for Monsanto to reform its practises and safeguard the health of the millions of children exposed to its products. The motion was passed with 53% of the vote.

Ms. Honeycutt successfully persuaded Monsanto shareholders to give the company a nudge in a new direction. She achieved this because she was willing to stand up and speak out, and because she was well-informed.

The message is inform yourself.

The most comprehensive coverage of world-wide GM news is GM Watch. Check it out, and subscribe to GM Watch news bulletins.