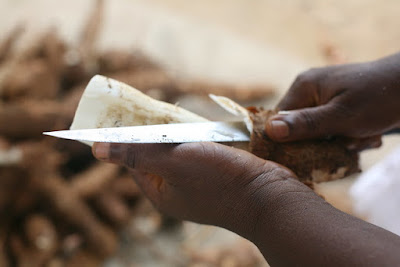 Cassava is a starchy root vegetable consumed by more than a billion people. It's a primary staple food in South America, Africa and Asia. Each year, the crops are plagued by cassava mosaic virus, with losses of 20 percent of the yield.

The first generation GM cassava was designed to produce an 'RNAi' (see [1]) which inactivates the virus by silencing a vital gene. This was initially hailed as a success, but the viruses soon evolved their way around the GM obstacle.

Biotech engineers then hit on the novel idea of permanently installing a 'CRISPR-Cas9' [2] mechanism into cassava to destroy the attacking virus.

CRISPR-Cas9 is a bacterial immune-system device which homes in on infectious virus DNA in the bacterial genome and cuts it out.

The cassava GM CRISPR-Cas9 installation was designed to disable the mosaic virus DNA by cutting it at two chosen locations, one within a multifunctional gene involved in gene activation, viral pathogenicity and suppression of gene silencing, and the other within a gene involved in replication enhancement.

In theory, since the cassava mosaic virus only infects plants, it shouldn't have evolved any capacity to escape a bacterial anti-virus system sneaked in there.

However, when the GM cassava was tested in the greenhouse, there was no reduction in disease incidence, nor in the severity of symptoms, nor in the amounts of viral particles in the plants.

This novel GMO with it's permanent anti-virus CRISPR has been causing concern since 2018, however, one well-known GM proponent was happy to tweet that "Ugandan biotech cassava field trials show another success in virus resistance protecting a crop that feeds >800 M".

Puzzled by this complete failure, the scientists analysed the nature of the mosaic viruses present in the cassava during the weeks after infection, with particular attention to the two genes which should have been edited by the Cas9.

They found that up to a half of viral particles had evolved a mutation in a single nucleic acid (a building block of the DNA chain) which enabled them to evade the CRISPR homing device. This only became obvious after prolonged monitoring of the virus: the immediate tests normally carried out to check for evolution of the virus wouldn't have picked it up. Also, there was disturbing evidence that wild-type cassava mosaic virus present in the infected plants (with normal expression of the two genes damaged by the CRISPR-Cas9), was instrumental in enabling the mutant viruses to replicate.

What was actually underlying all these unexpectedly successful viruses was something which poses "significant biosafety risks". In bacteria, the viral DNA attacked by natural CRISPR-Cas9 is degraded. Plants are a much more sophisticated form of life: they have mechanisms which repair damaged DNA and preserve their genomic integrity. When the GM CRISPR-Cas9 cut the viral DNA, the plant repaired it, recreating the pathogen. Moreover, the repair was not always perfect, thus generating novel, mutant pathogens.

The biotech scientists had created a perfect GM machine for churning out mutant pathogenic viruses, with a clear potential to develop into a novel, hyper-virulent, viral plague with enhanced gene activation, pathogenicity, ability to evade the host's immune system, and replication. This could wipe out a lot more than 20 percent of the cassava crop, and starve an awful lot of those ">800 M" people.

The authors voice the further concern that existing biosafety regulations are not equipped to deal with the novel circumstances arising from gene-editing techniques.

The story of GM cassava illustrates just about every point raised by GM-concern groups and individuals over the years:
It might well also illustrate, in speeded-up form, what's already happening in the world of weird DNA we're intent on surrounding ourselves with.
Background:
[1] RNAi FANTASY - February, 2018
[2] CRISPR/Cas9 GENE EDITING - March 2016
SOURCES: