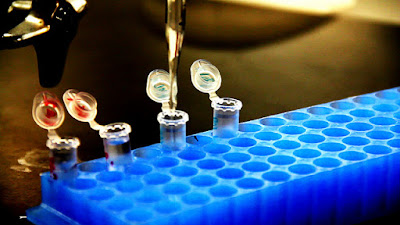 GM is changing.  Forget shooting the genome to bits with a micro-blunderbuss in the hope that the novel DNA-bullets lodge somewhere useful.  Now genetic engineers have a simple, inexpensive and remarkably effective method for making specific DNA modifications.

The latest from biotech is 'CRISPR/Cas9', a technique which needs little training and nothing too fancy or expensive in the way of laboratory equipment, and is rapidly eclipsing all other GM methods.


'CRISPR' stands for 'clustered regularly spaced short palindromic repeats' and refers to DNA sequences of this description found in bacteria.  CRISPR DNA springs into action when it finds foreign DNA beside it (More below).

The 'Cas9' part refers to an enzyme (a biologically-active protein) also found in bacteria, and which has two useful properties.

The second useful property is Cas9's ability to cut up any DNA it's been attached to.

The ability to cut up their own DNA is a vital part of the bacterial immune system.  If a virus (or other DNA-attacking pathogen) inserts its DNA into the genome of a bacterium, bacterial CRISPR DNA sequences react, generating an RNA grappling iron which brings a Cas9 molecule to the site of the invader.  The RNA switches the Cas9 enzyme onto 'active' mode and it cuts the pathogen DNA back out.  Once the Cas9-RNA complex has finished its task, the cell bins it.

Neat trick.  But, somewhat less neat in the hands of genetic engineers.

Various versions of the CRISPR/Cas9 system have been developed to edit genes in any organism, be it plant, animal or bacterium, any of which could become part of your food-chain.

In a bacterium, the viral insert is easily located by the specially-formed Cas9/RNA complex, and destroyed.  In the human back-to-front version, the molecular missiles are sent in to search-and-destroy a healthy bit of the genome.  Typically, a whole army of thousands of Cas9/RNA special forces is deployed to scour the whole genome (billions of DNA subunits long) until the part they're designed to latch onto is found and cut.

CRISP/Cas9 is so simple to create it is now available 'off-the-peg' from molecular-supply companies, or custom built for any research purpose.  It has, accordingly, swept through labs around the world at a break-neck speed.

Designing RNA to attach to a specific sequence of DNA is childsplay, and Cas9 will happily wreck whatever DNA it's attached to, but does that make it precise, predictable and safe?

All the same risks inherent in any GM technique apply to CRISPR/Cas9: unpredictable disturbance of the coherent functioning of the genome, and genomic instability.  Many of the same worrying technical tricks are needed, such as selection marker genes, Agrobacterium (plant pathogen) mediation, and super-charged but uncontrollable artificial gene-promoters based, for example, on plant viruses, are needed to achieve expression of the Cas9 and any inserted novel DNA.

No one's talking about what happens to all that spent CRISPR/Cas9 at the end of the the day.  Experiments on soya roots suggest it hangs around in the plant and carries on chopping and changing its genetic prey.

The CRISPR/Cas9 system is based on bacterial immune-reactions and bacterial enzymes, but can  destroy any DNA.   How reliable is a plant or animal cell's ability to control the foreign, invasive mechanism forced into it? What might resurface when CRISPR/Cas9-altered crops or livestock (and all their microbial flora) are stressed?  What's going to end up in the soil or inside you?