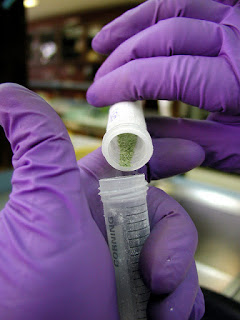 New varieties of biotechnology, each more extreme than the one before, are emerging from the lab at breakneck speed.
These have come to be known as 'synthetic biology', a curious name (see below) for a nebulous field, which seems to refer to any means of artificial reconstruction of life. It encompasses anything minorly more sophisticated than old-fashioned GM, to wholesale changes in metabolism, cell components, populations and ecosystems.

What is 'synthetic biology'?

The Oxford English Dictionary defines 'biology' as the science of physical life, and 'science' as systematic knowledge. This makes 'synthetic biology' the synthetic science of life.

We are, indeed, talking about an entirely synthetic branch of science, but it seems that the systematic knowledge part actually refers to synthetic life. This makes 'synthetic biology' the synthetic science of synthetic life.

Perhaps 'biological synthology' describes this latest biotech venture most accurately.
The synthetic answer to a future world in which today's trends extrapolate into ever-more mouths to feed and ever-scarcer arable land, is to reconfigure crop plants to grow better.

Two aspects of plant physiology have been targetted for synthetic improvement: photosynthesis (the use of sunlight-energy to create sugars from carbon dioxide in the air), and nitrogen fixation (the conversion of nitrogen gas in the air to a form which plants can use to create proteins).

One high-profile example of research into improving photosynthesis involves inserting biochemical pathways from plants, such as maize and sugar-cane, which have faster photosynthesis into rice which has slower photosynthesis. After rice, biotech scientists have their eye on wheat, cotton, oilseed rape and trees.

To this end, novel microbes implanted with the ability to photosythesise are under development. The extreme molecular surgery needed to alter something as fundamental as photosynthesis has been described by one researcher as a "metabolic heart transplant", which he acknowledged "the host cell may well reject".

A number of synthetic schemes to create crop plants which can supply their own nitrogen fertilizer are under invetigation.

Attempts to insert the bacterial nitrogen-fixing machinery wholesale into plants look doomed to failure: the energy costs and metabolic contortions needed to fit bacterial biochemistry into a plant are unlikely to be compatible with a healthy crop.

With Gates Foundation backing, the big money is going into converting plants which don't naturally associate with nitrogen-fixing microbes into unnatural ones which do. Plants of the pea and bean family grow structures (nodules) on their roots specially to house nitrogen-fixing bacteria, giving them their own private supply of fertilizer. Scientists plan to insert the entire machinery for growing the requisit nodules, and for attracting and installing the relevant bacteria into all major crop plants. This is no mean task because it involves a successful dialogue between the bacteria and the plant besides major structural changes in the plant roots, all of which depend on many genes acting in concert.

COMMENT Parts of this mechanism overlap with the dialogue between plants and soil fungi which is important in pathogen recognition. So, synthetic scientists better get it right.

Readers of GM-free Scotland back in 2013 may remember the mysterious 'N-fix' seed coating [1] which, seemingly, enables nitrogen-fixing bacteria to invade plants. This was hyped as 'natural' and 'non-GM', but then so are a lot of other products of synthetic biology. Maybe it is, maybe it's not, and no one's mentioning it now.


Going back to the original 'problem' all these synthetic answers are trying to address: more hungry people and less arable land.

It's been pointed out over and over again that hunger is everywhere in the world (including the USA), and isn't caused by a world-scale lack of food [2,3,4].

Planting synthetic 'better-growing' crops into dwindling and stressed soil is a poor (but patentable) substitute for good soil husbandry, soil regeneration and low-input agricultural methods which can be practiced anywhere.

The only possible conclusion is that synthetic plants which grow better (if they ever do, reliably) will better serve to feed those who already have food, create more profit for giant corporations, and make a bad situation worse.

Tell your regulators that their attention is being synthetically focused on the wrong answers.