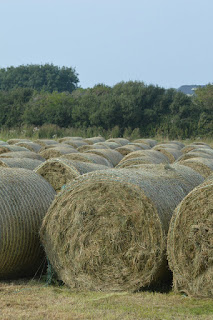 One GM-crop enthusiast in Germany has tried it, tested it, looked at the outcome, and changed his mind.

Farmer Glöckner is an experienced dairy farmer with an award for high productivity and a masters degree in Agricultural Sciences. He was one of the first to work with the biotech industry and to trial GM crops. From 1998 to 2002, he grew Syngenta's Bt176 GM maize and prepared silage from it to feed his herd. Progressively increasing amounts of the maize were included in the feed, so that by 2000, the maize content of the feed (40% of the total) was entirely Bt.

Glöckner kept meticulous records, was quick to notice changes in his herd, and quick to call for veterinary and laboratory support. When things had clearly gone wrong, he sued Syngenta and received partial compensation.

What had gone wrong with the Bt-fed herd has been summarised and reported in the scientific literature by Professor Giles-Éric Séralini, a scientist who has long had doubts about industry claims of GM feed safety.

From the second year of Bt-feeding onwards, Glöckner's herd had an abnormally high incidence of diminished milk yield, partial paralysis, kidney failure, liver disease, and mouth and udder pathologies. At the culmination of the trial period, 2002, 10% of the cows died and 30% were unhealthy. When the Bt feed was withdrawn, some of the unusual symptoms persisted until the final analysis some thirty months later.

This wasn't a scientific experiment, but was the first long-term close observation of a dairy herd fed controlled GM feed under normal, commercial management. Contrast this with Syngenta's feeding 'experiment' presented to regulators as evidence of safety: in this, four cows were fed Bt176 for two weeks, during which time one animal died. In Glöckner's herd, the level of health problems may well have been underestimated because unproductive animals were replaced with new stock as is usual practice on a commercial dairy farm.

Séralini's investigation also uncovered uncomfortable inconsistencies in the information provided by Syngenta. No scientific evidence was produced to back up the Company's dismissal of any connection between Bt maize and observed pathologies. While a state laboratory measured Bt protein in the GM silage fed to Glöckner's cows, Syngenta claimed there was none, but nevertheless asked him not to dispose of it on grassland.

This study isn't the first to indicate kidney problems after exposure to Bt protein. Also, it has recently been pointed out that the insecticidal mechanism of Bt might be much less insect-specific and more variable than previously hyped [1]. For example, it seems that 'cadherin' protein receptor sites on the surface of many vertebrate cells, including kidney cells, are able to bind and activate Bt toxins.

Bt176 was never widely planted, and was withdrawn from the EU market in 2007 when other varieties of Bt maize, MON810 and Bt11, had superseded it. However, whatever it was in the GM feed which harmed Glöckner's cows could very easily be in other Bt crops. Long-term toxic effects of GM food may not be noticed under the conditions normal in intensive farming: the turnover of animals is typically less than three years and their feed contains varying quantities and combinations of unlabelled GM components. As Prof. Séralini keeps insisting "More long-term assessment during GMO feeding trials should be performed."

Do you want to eat sick food? If not, demand long-term safety testing in the lab and on the farm.
Background: