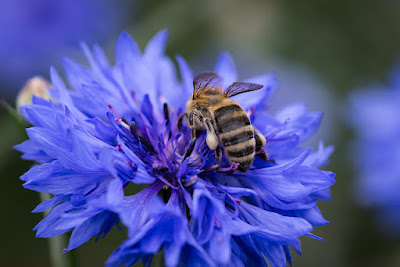 Some 40% of pollinator species, including butterflies and bees, are facing extinction.

Climate change is, of course, taking its toll as wild animals find their life-cycles out of step with the plants they depend on. More has been made, however, of the toll exacted by neonicotinoid insecticides ('neonics').

Now, the largest ever field study of the effects of neonics on bees has, indeed, confirmed the negative impact. It also revealed the extent of contamination of wild plants. This was backed up by second study published the same day which reported that wildflowers are the bees' main source of exposure to the insecticides.

The results of the field trial were probably not what its funders (pesticide manufacturers Syngenta and Bayer) were expecting. They might well be equally disappointed by the emerging evidence of side-effects of the next must-have GM insecticides in their pipeline, 'dsRNA' [1].

RNA molecules can be designed to react with, and so block, the expression of specific regions of DNA in the genome. dsRNA is a stabilised form which is converted to toxic 'interfering RNA' (RNAi) when it's eaten by a pest. By designing the RNAi to damage some vital gene in a specific insect, pests can be selectively killed without all the inevitable co-lateral environmental harm caused by conventional chemicals such as neonics.

The problem is that the designed to target a specific pest part is a biotech-friendly assumption about RNAi. No one's checked whether all the non-target (non-pest) organisms which could be exposed to a pesticidal RNAi actually don't have any genes which could be interfered with.

Because of the huge variety of wildlife in the field and the limited data on their genomes, this isn't a straightforward research task. Also, the RNA doesn't have to be a perfect match for the DNA it's silencing: close approximation is fine, and close approximation isn't specificity. And then, the length of the pesticidal RNA molecule will make it more or less specific: long pesticidal RNAs are desirable because they silence genes (kill) more effectively, but they also provide more off-target binding potential in other organisms.

With all this in mind, scientists used the honey bee genome as a model against which to test possible interference from a number of published RNA pesticides. They identified 101 insecticidal RNAs sharing high sequence similarity with genes in honey bees. Of concern is that gene groups active during vital honey bee embryo formation and development had a disproportionately high sequence similarity with all these RNAi pesticides: the scope for defective bees seems very real.

The extent of the risk was almost certainly underestimated during this study because genes of unknown function were excluded, as were unpredictable downstream effects in which genes unrelated to the original target of the pesticide are silenced.

Add to this that it's known that RNA can be replicated within a cell to produce secondary RNAs which may be imperfect copies and may disrupt other DNA regions.

Unlike chemical pesticides which will tend to kill related species, evolutionary relatedness seemed to have no predictive relevance to the likelihood of RNA harm.

RNA insecticides are every bit as non-specific and broad-spectrum as the old-fashioned chemical kind, but in a sneakier way. And, since plant debris blows in the wind, short-term spray-drift problems might well be replaced by worse long-term dust-drift ones.

Tell your regulators of the long-term catastrophe which will unfold unless they put a lid on all these biotech fantasies that the industry knows and understands what it's doing.