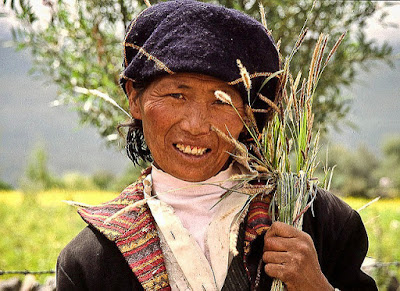 Of all our modern 'conveniences', the invention of the Industrial Food Chain must rank as the most unfit-for-purpose.

The Chain has a beginning, a middle and an end:
Like all chains, the Industrial Food Chain is only as strong as its weakest link. Unlike all chains, every one of The Chain's links is weak.


The fundamental weakness which permeates through The Chain is its dependence on finite resources.

With the exception of seed, all the resources at the beginning of The Chain are finite. So far, the only answer to this pervasive weakness is ever fancier technologies to generate economies of production, for example, the latest is 'precision' farming based on satellites and computers. These are very expensive 'economies' indeed.

In the case of seed, the resources are intrinsically infinite because the plants replace themselves. This potentially produces lots of the 'food' end-point of The Chain, but doesn't deliver so much of the 'profit' end-point. To address this, seed has successfully been converted to a finite resource by clever tricks including hybrid seed, patented GM seed, interventions to control marketing such as subsidies, price fixing and seed sales restrictions, and mass consolidation of the controlling agri-supply business.

Also, there's a significant wastage at every stage of The Chain. A lot of what's produced isn't food, it's other stuff. For example, 56% of plant varieties marketed in the EU are ornamentals such as roses and chrysanthemums, 9% of the crop-calories produced by The Chain go to biofuels and industrial materials, and 44% of crop-calories are syphoned off into meat production of which only 12 % (6% of the total) ends up feeding people. Plenty of 'profit' but not much 'food'.

The obvious wastage in The Chain has largely faded from view behind a smokescreen of redefined 'waste'.


Industrial Food Chain 'waste' includes any land not in constant crop production, the planting of any seed deemed 'substandard', undersized produce, harvest lost to pests, paying people to work the land, and failure to supply every last sale the market can be made to accommodate.

All such re-defined waste can be turned into cash, for example:
Despite using 75% of the world's agricultural resources, The Chain feeds only some 30% of the world's population. So, who feeds the vast majority of us?

The ETC Group (see Note) has been researching this question for several years. Its key finding is that 70% of the world's population is fed by a Web of peasant farmers using less than 25% of the world's agricultural resources.

The Peasant Food Web has a vast array of 'beginnings': it nurtures and shares some 2.1 million local varieties of 7,000 domesticated plant species, plus it protects and sometimes interbreeds tens of thousands of wild plant relatives: these small-scale farmers have the knowledge and innovative energy to respond to climate change and are closest to the hungry of their communities. Contrast this with the paltry 16 crops which account for 86% of Industrial Food Chain food production.

This Web has almost as many no-frills 'middles' as there are farming communities, and its 'ends' are food, more food, and waste which, by and large, is fed back into the Web to produce more food.

The future vision of The Chain is ever more and ever fancier GM versions of a very few crops at a cost of $136 million each to get to market.

ETC's report includes some fascinating data and conclusions. For example, only 22% of The Chain's calories actually nourish people, and, almost half the world's population is too remote and too poor to offer the profit The Chain demands. In conclusion, ETC's key message is:


"the Industrial Food Chain is too distorted, vastly too expensive, and - after 70 years of trying - just can't scale up to feed the world".

It's worth reading ETC's Who Will Feed Us? The industrial food chain vs. the Peasant Food Web for yourself.

ETC is the Action Group of Erosion, Technology and Concentration. It works to address the socioeconomic and ecological issues surrounding new technologies that could have an impact on the world's poorest and most vulnerable people. It investigates ecological erosion (including the erosion of cultures and human rights), the development of new technologies (especially agricultural but also other technologies that work with genomics and matter), and monitors global governance issues including corporate concentration and trade in technologies.