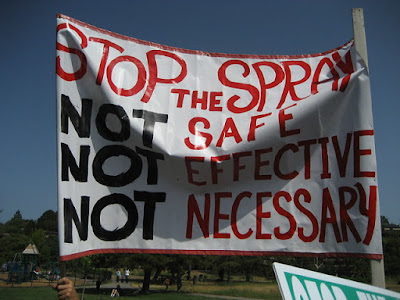 As Roundup herbicide and Roundup-tolerant GM crops become increasingly obsolete, the biotech industry has been trying to move 'forward' with a 'new' package: the antiquated broadleaf herbicide dicamba and dicamba-tolerant GM crops.

Back in 1994, some 5.7 million pounds of dicamba were used annually in US agriculture, almost all of it on corn.  It was already well-established that dicamba is prone to drift during spraying, especially in hot weather, and that it's a persistent environmental contaminant.  "Since dicamba can damage or kill most broad leaved plants, any unintended exposure can have important consequences.  These effects have been studied mostly in agriculture and little is known about impacts on native plants" (Cox).  A quarter of a century on, the situation isn't much different.

Despite the complaints pouring in since dicamba-tolerant crops entered the market [1], the US Environmental Protection Agency (EPA) seems determined to assist the biotech industry in keeping farmers running on the pesticide treadmill.

When the EPA extended dicamba's approval in 2018 (this, in the face of more than 1.1 million acres of damaged soya beans) Bayer assured the public that the EPA's continued registration was based on "extensive review".

Extensive review is, indeed, being carried out: state officials are devoting a lot of staff time to dicamba injury complaints and submitting an array of data on dicamba injury reports with weekly phone calls to the EPA.

What's actually coming out of this extensive review is ever-more extensive requirements for dicamba users, specified in vague and unenforceable terms, and "a bunch of extra work" on certification programs (not all of which are being taken seriously by participants).

Some dicamba training sessions required for applicators in 2019 were described as "sales pitches", or only lasted 30 minutes instead of the advertised two hours, with people openly wandering in and out of the sessions.

In a show of keeping dicamba-spraying "out of the heat of summer when the volatilization is most likely to occur", the EPA has restricted spraying of soya to 45 days after planting.  However, in states such as Iowa, where soya goes into the ground in May, legal dicamba application will still be ongoing well into the heat of July. And lets' face it "People can just lie about planting date to escape that one" (Purdue University weed scientist).

The EPA also pays lip-service to nature conservation by requiring a 57-foot buffer around a field "where endangered species may exist".  No one's figured out, however, how to tell if an endangered species 'may exist' in an area, nor how anyone could prove you'd got it wrong.


COMMENT. Presumably you can poison non-endangered species, including humans, with dicamba as much as you want.


That comforting extensive review is having a lot of knock-on effects at the state level.  Half way through 2019, Missouri Department of Agriculture has only just started processing dicamba complaints from 2017.  So much time is being devoted to addressing dicamba injury complaints that other routine inspections are being neglected, with potential human health impacts.  Field staff are difficult to keep: they get burned out on dicamba investigations.

With the EPA's blessing up until now, some states have been trying to address their dicamba problem by imposing their own restrictions on use under a law which allows them to issue special local needs registrations for pesticides.  This law, however, was intended to allow additional uses of a pesticide.  There are signs now that the EPA is going to reverse its previous guidance on the use of the law.  This would mean States will have to turn to their own internal rulemaking processes which can be cumbersome and complex, and likely put them at the receiving end of a deluge of lawsuits from the biotech industry and farmers.

While attention is focused on crop damage, biotech industry profits, complex regulations, and fiddling with dicamba-usage instructions, all the wildlife that dicamba spray lands on will suffer the dicamba effects described above: trees and bushes will grow abnormally and will have abnormal offspring; some plant diseases will be encouraged; soil microbial balance will be disturbed; animal wildlife will be harmed indirectly by the damage to their food and breeding grounds, and directly by the toxic effects of dicambia.


If the EPA is so worried about endangered species, why is it trying to create more?


Perhaps it's time to demand dicamba-free food (as well as Roundup-free and GM-free)?
Background