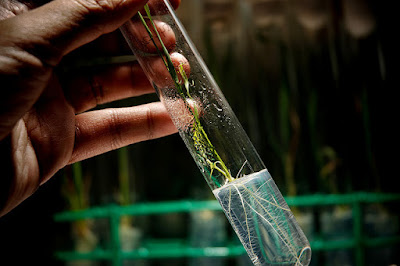 In particular, the biotech lobby is striving to evade any regulation of 'new' GMOs produced with 'gene editing' techniques. With recent EU elections and Brexit, this is the perfect time for them to push for light-touch, corporate-friendly GM laws.

'New' GMOs have acquired a wealth of names in their short history [1], but they're all created using laboratory techniques which artificially alter their DNA or related RNA to change or eliminate gene expression, or to alter gene regulation.

The more spectacular examples of new GMOs include super-muscled pigs, non-browning mushrooms, and soya with altered fats. Most prominent on the market, however, is more-of-the-same-old herbicide-tolerant canola. Biotech wheat, which has so far avoided commercialisation, may well now be heading our way in herbicide-tolerant (including glyphosate-proof) new-GM form [2].

New GMOs aren't, of course, philanthropic ventures. They aim to shore up the lucrative agri-chemical and biotech industries. Patent-holders, both in corporations and in research institutions, have invested so heavily in the technology, they can't back off.

All these groups are desperate to avoid safety-testing which is time-consuming, expensive and may render their new-GM babies unmarketable. Neither do they want labelling, which they have known for years will create consumer resistance to their product, and they certainly don't want anyone to be able to trace new-GMO problems back to them.

What's the concern about new-GMOs?

Readers of GM-Free Scotland will be aware that, while some aspects of the location and nature of gene editing are precise, off-target changes in the genome are being found by scientists who take the trouble to look [3,4,5]. Also, the genome-wide functional disruption resulting from a 'precise' edit is entirely unpredictable [6]. There's a real risk of novel toxins, allergens, pathogen-supporting physiological changes, and reduced resilience in new GM foods and feed: these could harm humans, livestock, wildlife, and the wider environment.

The bigger picture is described by GMWatch:

Techno-fixes like GM cannot solve complex problems like climate change. And the traits we need for sustainable agriculture, such as plants that are resilient to pests and climate changes, cannot be obtained by tweaking one or a few genes, as with GM techniques (including gene-editing techniques). That's because these traits have many genes at their basis, working together in complex networks.

We need a climate-resilient system of food production that protects ecosystems and delivers healthy food for all. Locally adapted solutions developed in collaboration between farmers, researchers, and local communities are the real innovative food future.

P.S. If you're hesitating about the need to take action check out AMERICA'S GM PLANS - August 2019.