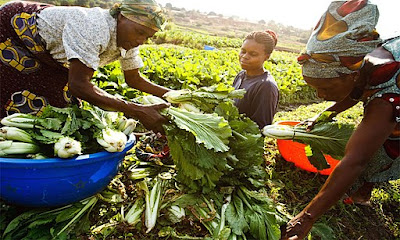 In particular, iron, zinc and vitamin A in staple foods, such as rice and millet, have been a focus for biofortification schemes. Both conventional breeding and, increasingly, GM techniques are being used to achieve these 'nutritionally enhanced' crops.


The Green Revolution of the 1960s promised to solve world hunger: the reality is that the limited varieties of high yielding, chemical dependent, intensively-bred crops of this Revolution provide only calories.

"It is well known that a diverse diet rich in vegetables, fruits, legumes, nuts and whole grains provides all the nutrients needed for good health. Yet in the last several decades, agricultural research has focused almost entirely on raising yields of just a handful of crops, notably cereals, with little emphasis on nutritional quality" (GRAIN).

Breeding for yield at the cost of nutrient value, and depletion of the soil they're grown in, has drained staple crops of their goodness.

Participatory research in small peasant communities in India shows that traditional diversified farming systems provided diets with ample micro-nutrients. The Green Revolution has changed all that [1]. The story repeats itself across Asia: in South East Asia, for example, where diets once included a broad range of cassava, maize, beans, taro and sweet potato, now people eat white rice three times a day. This level of consumption of simple starch fails to deliver essential nutrients, and induces blood sugar swings blamed for the high incidence of obesity and diabetes in Asia.

Given that at least 40 nutrients have been identified as essential in our diet, crops bred or genetically modified to increase one or even a few individual micro-nutrients can't adequately replace the loss of diversity in the diet. Add to this that recent years have seen scientific recognition that micro-nutrients, including antioxidants and pro-oxidants, exist in many forms and function together as an interacting network vital for health.

Governments, private foundations such as the Bill and Melinda Gates Foundation, and multinational corporations are pouring cash into the development of biofortified crops. Their projects on biofortification use women in the community as leverage by targeting them with training programmes, marketing efforts and feeding tests. When what is clearly needed is biodiverse farming, this is a profitable way to move things in the opposite direction to what's needed, but as the People's Coalition on Food Sovereignty says "Biorfortification is a business strategy, not a solution to global malnutrition."

GRAIN* sees biofortified crops as part of a top-down, Western, white, male-dominated, capitalist 'ideal' food and agricultural system. They are "not aimed at strengthening local farming and food systems, but replacing them with supposedly superior crops". "Malnutrition cannot be isolated from poverty and inequality. Since biofortification doesn't address the root causes of poverty and malnutrition, it risks blindly reinforcing it".

The private sector is very actively involved in generating demand for biofortified crops, and targeting women seems a key part of this. GRAIN is clear that "In order to promote healthy, diversified diets, we must promote biodiverse farming. Peasant-led agroecology that empowers women is the most sustainable approach to producing diverse, nutritious and culturally appropriate food while improving health". It hopes is that "women's groups will look more closely at the issue of biofortification and invite all our allies to consider a global boycott of biofortified crops".

USEFUL RESOURCES TO CHECK OUT

GRAIN Reports at www.grain.org.
GRAIN is a small international non-profit organisation that works to support small farmers and social movements in their struggles for community-controlled and biodiversity-based food systems.