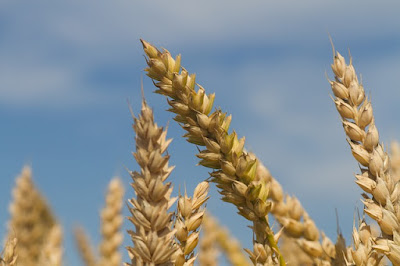 Gene editing has been described as 'promising', 'powerful', 'precise', and of course 'safer'. What is it actually going to do to our food and farming?

Recently published work by Chinese scientists is probably a good indication of what to expect.

The experimental subject was wheat. It's not easy to add artificial genes to wheat because it has three set of chromosomes*, unlike most plants which have only one set.

* Chromosomes are paired, gene-bearing structures which form the nucleus of the cell in higher forms of life.

This means wheat has a huge genome with substantial genetic duplication, and the effect of a lone, artificial gene will be diluted out of the picture. Bombarding wheat DNA with targeted gene editors, however, did alter all six chromosomes in a tiny proportion of treated wheat embryos.

The problem to be solved by the Chinese team was the (non-novel) one of how to create wheat on which a wider range and greater amounts of herbicides could be sprayed. By applying two editors, one of which was constructed to carry out two edits in a single gene, a GM wheat was generated with tolerance to three different classes of herbicides which, usefully, appear to act synergistically.

Because regulatory frameworks have been devised to deal with artificial DNA, the scientists also successfully tested an editor based on 'RNA', which is the active molecular intermediate and controlling agent in DNA and gene expression.

Surprise was expressed at the "unexpected abundant diversity of the resulting genotypes" which arose at one edit site.

No 'off target' editing in genomic sites with known similarities to the target genes was detected. However, ballistic bombardment is a crude delivery procedure with an obvious potential for collateral damage. Also, it's been established that current methods of genome scanning are a poor predictor for unintended edits [1].

So, it looks like the gene-edited food of our future will be staple crops, stacked with numerous edits to facilitate ever-greater use of agrichemicals, achieved using editors designed to avoid regulation.

Safety testing doesn't feature anywhere there. Given the scope of unexpected outcomes already witnessed in various forms of gene editing [1,2,3], this a serious omission. Wheat, with its triplet chromosomes and multiple gene repeats appears to have scope for a wide range of unexpected and abundantly diverse off-target mutations, with resulting novel proteins and possible harmful qualities.

Gene editing is, no doubt, 'promising' and 'powerful', but its 'precision' depends on how you define that term, and its 'safety' remains an assumption until proven by extensive scientific testing. GM Freeze is campaigning for strong regulation of all forms of GM including gene editing. Its work is even more important as we move towards Brexit and as industry continues to try to undermine regulation in the EU and beyond. Check out how you can support its work at www.gmfreeze.org and www.donthide/gmfreeze.org.

CC image of wheat by Kristine Lejniece from Pixabay