The future of potatoes 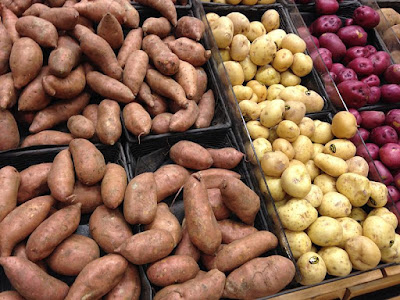 GM potatoes with a little extra something for everyone are wending their way into American supermarkets. To please the potato processors, these wondrous spuds don't get black spots when bruised [1]. To satisfy French fry aficionados, they don't turn brown when they're old and fried.

To coax consumers, GM relieves them of the dread threat of 'acrylamide' carcinogen in their fries [2]. To suit farmers, they promise blight-free crops. These spuds are very novel and very uniform. They come at a cost, and with more than a few risks [3].

Potatoes are a staple food in many parts of the world. In term of kilos of food per acre, potatoes have a very high yield, they're easy to grow and provide several important nutrients. In the ancestral Andean home of the potato, the climate isn't supportive of blight. The farmers there know that potatoes thrive on diversity, so they grow dozens or even hundreds of different varieties in a single plot. This maximises the yield and the nutritional value of their crop, while minimising pests.

Why have such weird GM traits suddenly become imperative in our potatoes? The short answer is probably the dominance of the potato processing market which requires a huge supply of uniform, unblemished raw material all the year round.

This ready market makes a successful crop of potatoes very lucrative for US farmers. The temptation seems to be irresistible to grow potatoes in humid areas where fungal infestation is inevitable. In these regions, only way to achieve the big yield needed is through frequent, expensive applications of multiple pesticides; the GM-generated fungicide is only one such pesticide, and the rest will still have to be applied by the farmer.

Uniform potatoes are achieved through the use of clones. If you grow huge areas of identical, cloned plants, they will become susceptible to numerous diseases, of which late blight is only one*. If you create a pest-gap, then another pest will come along to fill it: the control of one pest isolation is pointless, but it sells GM potatoes to the farmer.

*Cloned potatoes were also the recipe for the devastating potato famine in Europe in the 019th century.

The size of the crops and the scale of processing of the modern potato means mechanical handling at all stages, all of which can cause bruising. Pretending these apparently unblemished GM spuds aren't bruised and don't need complex, expensive and wasteful preparation is a good way to sell GM potatoes to processors.

The need for a year-round supply means old, stored potatoes are a vital part of the system. Disguising their age is good way to sell GM potatoes to French fryers.

Persuading the consumer to want GM spuds has always been the biggest hurdle. The notion of 'healthier' low-acrylamide GM potatoes seems little more than a desperate sales ploy to push GMOs, because it seems to have little to do with reducing any cancer risk [2].

GM spuds as the modern, scientific way forward for the potato industry seems to be based on a carefully contrived set of illusions. In truth our potatoes are rubbish, and the GM ones are as simplistic as the monocultures of clones we're planting. Potatoes need breeding, but because breeding new varieties of potatoes takes decades, industry simply isn't interested.

Fortunately, this isn't all bad news: there are some enlightened potato breeders making headway now into the market with new varieties, hybrids and potato seeds. For example, the long-running Savari Research Trust in Wales, and the Netherlands-based Bolk Institute and Solynta.


Regarding the supply of conventional spuds, the makers of GM potatoes deny the two could inadvertently become mixed up, but this level of control in the field and during transportation, storage and processing is in doubt. The 'Non-GMO Project', which offers a non-GM verification scheme in the US, has added potatoes to its 'High Risk' list, meaning extra scrutiny will now be applied. Tell your American friends about the non-GMO Project.

Make a New Year's resolution to make sure your food suppliers and farming organisations are aware of the need to move to diversified potatoes which have been bred in the not-too-distant past.

Most of these problems could, of course, be reduced by ditching the junk and focusing on healthier, quality food. Try out some heritage potatoes fresh out of the ground, and taste the difference.