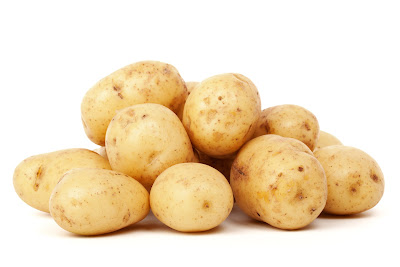 When genetic engineer whizz-kid, Caius Rommens put his mind to enhancing the potato-experience for all spud-users from farm to factory to fork, he homed in on the annoying black patches which often sully the whiteness of the perfect potato.

The black areas are caused by the presence of a black pigment made by the potato itself, so the remedy was obvious: pop in a bit of artificial DNA which would switch off one of the genes the potato needed to create the black stuff.

Thus were born, 'Innate' stay-white spuds which don't bruise when harvested from the field, nor when they're trucked to the shops or factories, nor when they're streaming through a processing machine. Users don't have to spend time, energy and money cutting out all those black bits, and there's less waste at every level of the bruising supply chain.

Rommens began to ask himself some uncomfortable questions about the biological entities he had disturbed in the course of all his re-creation of life. His deliberations lead to some very uncomfortable answers, and he quit his post as director of research at Simplot Company, the maker of the GM spuds, took up farming and wrote a book about the problems [1].

Bruising is a big commercial issue because potatoes are liable to be bruised at all stages, from harvesting to transportation to storage and to processing. Potatoes don't develop black spots for fun or just to annoy humans. The pigment is laid down as a reaction to damage and is there to protect the plant. Protection is needed because any bruised area is prone to infection and to water loss.

GM stay-white spuds bruise just as easily as any other, it's just that the bruises can't be seen. Without any incentive to handle the novel potatoes with care, there's every reason to believe they will end up with even more bruises than conventional ones.

While the bruises may be invisible, the damage is still present. The difference is the GM potatoes are unable to protect themselves. And, in the unprotected bruised tissue there's every chance of fungal, viral, or microbial infection, and infestation. When potatoes are transported and stored in bulk, all these pathogens can spread through the whole batch, and where the same facilities are used for other potatoes, they may spread disease far and wide in the potato supply chain. Moreover, fungal colonisation can be associated with a host of toxins, and even carcinogens and allergens.

Bruised tissue is also stressed tissue, and stressed potatoes naturally accumulate at least one toxin which, in sensitive individuals (including people taking one class of anti-depressant drug), can trigger, for example, seizure, stroke and cardiac failure.

An inherent problem in artificially blocking a gene is that the normal and highly complex progression of the biochemical reactions in which the gene plays a part, can no longer flow as they should: the result is an abnormal accumulation of substances which find nowhere to go and can be toxic at abnormally high levels. Rommens identified a potential for at least two such substances throughout stay-white spud flesh:


It really would be healthier to know the bruises are there so that you can cut them out or chuck the tubers.

'Innate' is a technology which could end up in many other GM fruit and veg with all the same potential for toxins in our food and for insidious, but escalating, post-harvest spread of plant pathogens.

If you have friends or relatives in the USA, make sure they know that now is the time to tell their supermarkets, green-grocers, and fast-food outlets to ditch GM potatoes. If they don't, it's likely we'll get them too, post-Brexit.

* Interestingly, GM high lysine maize LY038 (intended to replace lysine supplementation for pigs fed a corn/soya diet) was withdrawn from the European market because of elevated levels of this same neurotoxin. LY038 maize contained only about 10% of the neurotoxin measured in GM potatoes similar to Innate.