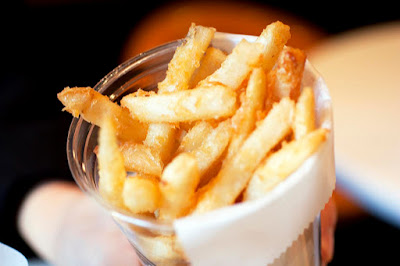 One of the hot issues in 2002 was the discovery of 'acrylamide' in food, especially in potatoes.

This wasn't good news because the International Agency for Research on Cancer (IARC) classifies acrylamide as Group 2A, 'probably carcinogenic to humans'. The main evidence for this is that, at high doses and in pure chemical form, acrylamide causes cancer in laboratory animals. It's linked to a whole stack of other toxic effects too, but it's the carcinogenic one that regulators struggle with most because of the difficulty in defining the actual risk and in setting a 'safe' dose.

Acrylamide is a natural by-product of food cooked at high temperatures (above 120 degrees C) which covers just about all cooking methods except boiling, steaming and microwaving. If this seems to imply that all the tastiest foods (fried, grilled, roast, baked etc.) come contaminated with acrylamide, they likely do.

The problem chemical forms when heat is applied to the amino acid 'asparagine' (a natural building block of proteins) in the presence of simple sugars such as glucose and not too much water: these conditions are met during the cooking of a lot of foodstuffs; they're also met during the use of tobacco products.

Regulators have told food processors to change their methods to minimise the formation of acrylamide, and have issued dietary and food handling guidelines to the public to minimise intake. Both seem to have had some effect on consumer exposure.

Genetic engineers have also jumped on the bandwagon with GM potatoes designed to produce less acrylamide when fried. This feat was achieved by artificially silencing a gene needed for the production of simple sugars. The idea is that if the GM potatoes don't have enough sugar available to react with the asparagine no matter how you cook them, they'll form less acrylamide and can be sold to health-conscious consumers as 'healthier' French fries. Seemingly, a win-win-win situation for the consumer, the biotech industry, and the potato product suppliers.

But, are GM potatoes really the healthy alternative they're hyped to be?

Creator of the low-acrylamide GM spud, Caius Rommens, who stepped out of the clutches of the biotech industry in 2013, has expressed doubts [1]. In tests, potatoes fried for 30 minutes induced a thousand-fold less genetic mutations (an indicator for carcinogenicity) than beef fried for 15 minutes.

Acrylamide intake from the diet is also dwarfed by that from smoking (by about five-fold), and the cancer-risk from acrylamide in French fries is similarly dwarfed by the risk to health from that same food's salt and fat content.

While multi-organ carcinogenicity of acrylamide at huge doses ("1,000 - 100,000 higher than the 'usual' amount") in laboratory animals is well established, epidemiological surveys in humans have been negative or equivocal, mainly due to the failure to measure the actual acrylamide exposure or to factor in smoking. Factory workers exposed to high acrylamide levels by inhalation suffer neurotoxic effects but not increased cancer incidence.

Acrylamide itself is only slightly mutagenic, and most is excreted in the urine within hours. The cancer problem seems to arise from a small proportion of acrylamide which is metabolised by the body to a highly mutagenic and chromosome-disrupting derivative. Production of this damaging derivative, however, seems to vary with health, age, and other dietary materials consumed at the same time.

From a historical perspective, potatoes have been a staple food in many populations for over 10,000 years: besides being energy-rich, they contribute key nutrients including fibre, vitamins C and B6, potassium and magnesium. They have to be cooked to make them digestible, and cooking is also the best traditional way to make food safe. One journalist has pointed out that acrylamide must have been in our food for as long as we've been cooking.

From a food chemistry perspective, acrylamide is only one of literally hundreds of different compounds which form during cooking and give our food a lot of its sensory qualities, its taste and brown colouring (think bread crusts, roasted coffee beans).

Evidence suggests these compounds have beneficial properties such as anti-oxidant and blood-pressure reducing qualities. Our obsession with silencing the genes which facilitate acrylamide production in potatoes must be reducing the generation of all the other cooking-derived substances too.

Most of these compounds are indigestible and pass through our gut where they can affect the micro-flora. Some substances, such as the sugar derivatives (like acrylamide) support 'good' bugs: reducing these isn't a good idea. Others, such as protein derivatives formed from meat support 'bad' bugs: if the 'good' bugs have been suppressed the 'bad' bugs will thrive. The risk of chronic disease due to adverse gut microflora may well outweigh the tiny, putative, risk of cancer.

Those 'healthier' GM potatoes might not be so healthy after all.


Warn any friends and relatives you have in America that 'Innate', 'White Russet' and 'Hibernate' potatoes on their supermarket shelves are GMOs and that they are anything but 'healthier' no matter what the label might say.

If the Brexit fiasco turns out to be as bad as it looks at the time of writing, you may have to watch out for these GM potatoes in the UK too.