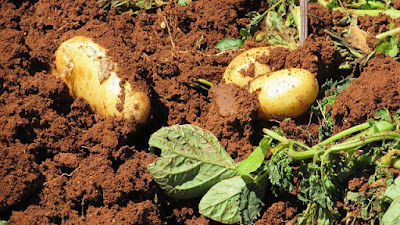 Twenty years and two continents apart, two scientists sounded the same warning about the same GM crop. Both were mad-keen on the promises of genetic engineering, until they looked at the results of their own experiments and changed their minds. The crop which brought about this dawning was the potato [1].

In Scotland, 1998, Dr. Arpad Pusztai spoke out about the multiple adverse effects he saw in his laboratory rats fed GM spuds. In America, 2018, Dr. Caius Rommens reviewed his years of work in industry creating thousands of GMOs: he realised his "almost daily experience" was that "most GMO varieties were stunted, chlorotic (yellowed), mutated, or sterile, and many of them died quickly, like prematurely-born babies".

Rommens is now very clear that real scientists are people who love to study the natural world, not to modify it. Those who call themselves 'scientists' today spend their days staring at computer screens, generating and analysing numbers. Their focus is on imposing a controlled predictability on the capricious natural world so as to liberate society from the erratic forces of nature. Genetic engineering is not science, nor even a profession but "the expression of distorted mind-set".

To genetic engineers, GMOs are their babies, totally beyond criticism or defect; critical assessment of their own creations is simply unthinkable. Looking back at his former existence, Rommens sees himself like every other genetic engineer: dangerously addicted to genetic engineering, incredibly biased and narrow-minded, suppressing the reality of his creations, and blindly averse to constructive criticism.

Asked about why he chose to blow the whistle in a book rather than follow the scientific procedure of experimentation and publication in a peer-reviewed journal, Rommens' answer was simple, it would cost him about half-a-million dollars to do all the studies he now realises are necessary. He didn't mention some even bigger hurdles than the cost, which Pusztai was quick to make clear after the scientific backlash against him: it would take a "very brave person" to risk proving any danger from GM food such as those Pusztai's experiments had suggested. Add to this, the investigations would need industry approval, industry permission to publish, and industry to supply the GM and parent comparator plants: none of these will ever happen.

COMMENT Twenty years earlier, Pusztai had been awarded the equivalent of 3 million dollars to do the studies needed just to establish safety testing procedures. This much larger cost must be added to the cost of simply developing the GMO in the first place. In the event, UK taxpayers' money was wasted because the biotech industry, the government and his fellow scientists orchestrated the abrupt termination of the project before it could do any more harm to their GM babies.

Rommens comments also on the subject of peer review and GMOs. Peer review is the quality-control system for published science. After peer review, it should be possible for the experiment to be repeated and the outcome confirmed: this is the key-stone of science. However, when it comes to the non-science of genetic engineering, the peer review process doesn't deliver. Rommens describes how he spent a very large part of his time trying to confirm the peer-reviewed work of his colleagues. He came to the conclusion that 99% of the articles on GM crops are irreproducible or misleading and should be retracted.

***
Note on science vs. genetic engineering.

When you're studying natural life, you know there's going to be a huge inherent variation, but you'll still identify significant dominant tendencies. GMOs are assumed to have a controlled and stable trait imposed by their artificial DNA. This assumption is wrong: the only predictable thing about GMOs is that they're unpredictable.

Scientists and genetic engineers make mistakes just like anyone else: yet, retraction requests are not viewed as good honest science, but are frowned upon, and very rarely happen. In 2013, Rommens asked for one of his papers on potato 'improvement' by genetic transformation using other potato genes be retracted. His reason was that on reviewing his laboratory notes, he realised a DNA sequence and the source potato for a DNA fragment had been incorrectly reported. This has, illogically, been used as a criticism against him.

To give Pusztai the last word:


"consumers are carrying all the risks of GM food"

and it seems to be in the nature of humanity that we only "take something seriously once a disaster occurs". Pusztai voices a great respect for the British general public because they can ask some very uncomfortable questions of the biotech industry.