A brief history of GM potatoes 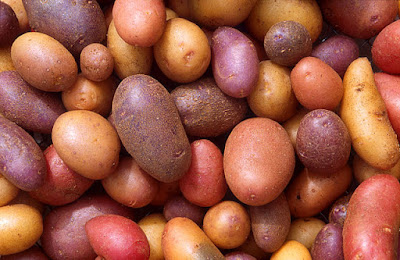 After the damp-squib of the earliest attempt to market a GM vegetable, the 'Flav Savr' tomato, all the signs were that the humble potato was going to be the real cheerleader for fresh, recognisable biotech food.

First out of the lab was 'NewLeaf' potatoes, a GM version of America's favourite Russet Burbanks. NewLeaf had novel genes for resistance to the Colorado beetle and to leafroll virus, both major pests in US potatoes. Farmers growing these GM wonder-spuds were promised an 80% reduction in their pesticide applications, meaning less time, less cost, and more profit. The acreage planted to NewLeaf soared for the first three years (1996-1998), but then levelled off way below its expected potential and below the sales' volume profitable to the biotech industry. By year 5, planting had abruptly plummeted, and one year on NewLeaf was pulled from the market.

It seems that with the rising public debate about biotech products, potato processors (the biggest customers) had taken "a very hard look at how they were going to respond to any potential controversy" and decided NewLeaf "was not adding value to their business".

Part of this rising public debate had kicked off in Scotland in 1998 (the year before, NewLeaf planting stalled). Unfortunately for NewLeaf, it involved a GM potato.

At that time, the British government was trying to push its own GM agenda with crops of economic importance in the UK, starting with peas and potatoes. Dr. Arpad Pusztai in Aberdeen was contracted to develop safety testing for 'lectin'-generating aphid-resistant GM potatoes created by English biotech scientists and supplied by them (along with the parent-type controls grown side-by-side) for his experiments.

As a biochemist and nutritionist respected for his expertise in lectins*, Pusztai focused his tests on the part of the consumer most exposed to the novel insecticide, the gut. By his own admission, Pusztai thought GM food "a great idea" until he saw in his rats the multiple adverse reactions to their GM potato diet.

With the agreement of his bosses, Pusztai spoke very briefly about his concerns on a TV current affairs programme. Instead of generating further experimentation to confirm and explore the worrying finding, it seems the US biotech industry (which at the time was intent on commercialising its own, unrelated, GM potatoes) put pressure on the US White House, which put pressure on the British Prime Minister, who put pressure on the Aberdeen laboratory bosses, who back-pedalled on their previous position of support and engaged in the first shoot-the-messenger exercise for dealing with inconvenient GM messages. Pusztai was fired, denied access to his data, and his laboratory was abruptly closed down. The scientific establishment closed ranks against him, and the message was clear: no one has ever dared repeat Pusztai's experiment.

GM potatoes for consuming fresh lay low for the next 15 years or so, until agricultural-supply company, J R Simplot, started to slip its own 'healthy', 'blemish-free', 'easy-process', 'farmer-friendly' GM potatoes onto the market. These are mostly Russet Burbanks again and are sold under the innocuous-sounding names of 'Innate'*, 'White Russet', and 'Hibernate'. They are not labelled 'GM'.

McDonalds and Frito-Lay immediately stated that they didn't intend to use these next-generation GM potatoes any more than they had NewLeaf. However, Simplot is pressing on regardless, presumably in the hope that sales to the public will reach a volume at which the Big Potato Users will be persuaded to cave in.

This might have been the end of the story, with GM potatoes living happily ever after (even if they didn't make us very happy), if it wasn't for the recent steps taken by Dr. Caius Rommens.

Dr. Rommens is a true child of the GM era who chose his career because his university professor advised him that GM was "the best option for a good job". After graduating, Rommens spent six years in the Monsanto "boot camp" learning the tricks of the GM trade and learning not to worry about the consequences. After that, he spent thirteen years working for J R Simplot Company where he created "at least 5,000 different GMO versions each year" culminating in about 200 patents and articles, plus Innate, White Russet and Hibernate GM potatoes.

Just as these GM potatoes were being prepared for commercialisation, Rommens began to question his work: "I identified some minor mistakes and had my first doubts about the products of my work. I wanted to re-evaluate our program and slow it down, but it was too little too late. Business leaders were involved now. They saw dollar signs. They wanted to expand and speed-up the program, not slow it down". In 2013, he quit Simplot and took up traditional plant breeding on a small farm in the mountains.

No longer part of the scientific establishment, Rommes re-examined his past patents, articles and petitions for de-regulation. He also kept up the with the scientific literature.


Simplot was smart enough not to repeat the NewLeaf non-event. It's GM potatoes are designed to be attractive to consumers first and foremost: if the public want to buy and eat them, everything else should fall into place.

Rommens, however, was smart enough not to repeat the Puzstai fiasco, and exited the biotech and scientific arena before turning whistle-blower.

Rommens' book, Pandora's Potatoes: the worst GMOs (ISBN 9781986600835) is in fact little more than a booklet, easy to read and with supporting illustrations on nearly every page. You can buy it on www.amazon.co.uk .

*’Innate’ is a brand name, apparently referring to the re-insertion of one of the potato's own genes. This causes the plant so much confusion that its natural gene stops working.