Gene flow is a headache. Engineered DNA in plants where it's not meant to be is a management headache for the biotech farmers and companies because the genes which have gone walkabout are patented. It's also a financial headache for non-GM farmers because the resulting pollution reduces the market value of their crops. At present it's a headache for regulators because pest-resistant GM plants popping up in conventional 'refuge' crops upset their their carefully dictated pest-resistance management strategies. The possibility that it could cause something more than just a headache if the roving man-made genes generate drugs, industrial chemicals, allergens or other toxins in unexpected places is being studiously ignored. 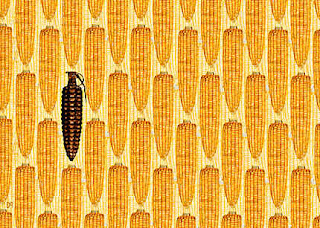 Regulatory consideration of gene flow has always focused on 'outcrossing', the movement of pollen out of the GM field and into conventional plants in other fields. Some of the seed from the conventional plants will then be GM and will give rise to 'adventitious' GM plants in the next generation from which more gene pollution will spread. Depending on the plant, outcrossing can be caused by vectors such as wind and insects, neither of which can be controlled. To reduce the likelihood of this gene pollution, regulators have specified separation distances between GM and conventional crops which measurements have shown should make the level of outcrossing negligible.

In crops which tend to be self-pollinating, such as cotton, these defined separation distances can be very small. Indeed, tests have shown that pollen-mediated transgene flow in from Bt cotton rarely exceeds 1% even at a distance of only 10 metres from the field.

However, other tests have unexpectedly told a different story. In one experimental non-Bt cotton plot in Arizona, an 8% presence of Bt cotton was discovered. This means the non-Bt seed planted was already badly contaminated. In subsequent testing of commercial non-Bt cotton seed bags, three out of eleven bags contained 1% Bt cotton seed.

These findings have led to a study in which more detailed measurements of GM contamination in cotton seed production fields were made. In this study the simplistic parameter of the distance travelled by pollen from GM fields was replaced by analyses based on the overall spacial relationships between the GM and non-GM fields. Sampling was comprehensive and designed to distinguish between adventitious plants and outcrossed seed.

There were a number of interesting findings.

Out of six non-Bt seeds lots used in the experiment, two were found to be contaminated with Bt genes: one at a level of 0.5% and the other at levels of up to 28%.

A planting error led to nearly 20 rows of Bt seed being planted along one edge of one of the non-Bt test plots; this mistake was only uncovered due to the comprehensive sampling regime used in the standing crop.

Pollen-mediated gene flow from Bt cotton was “rare” amounting to an average of 0.23% of seeds at field edges (where contamination is likely to be highest).

The authors' conclusions were that seed-mediated gene flow is by far the most prominent source of transgene contamination, and that adventitious presence in seed supplies plus planting error were major causes.


OUR COMMENT
Our regulators' obsession with pollen-mediated gene flow may be misplaced: human error or carelessness in handling GM seed is the biggest threat. Put another way, the seed producers and farmers are a much worse threat than the bees.
While this experiment was on cotton which is a low-risk crop in terms of gene flow, the human role in gene-pollution revealed in it applies to all crops.
The indication is that regulators should be testing imported seed from GM-growing areas much more thoroughly and systematically than the present random tests. It's also imperative that routine comprehensive testing of imports is extended to adventitious presence of experimental DNA constructs.
SOURCE: