Hershey - using GM or not? 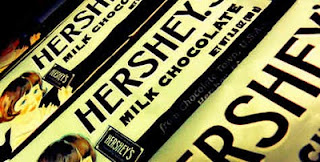 America's only home-spun maker of chocolate, the legendary Hershey, has been giving very mixed message on its use of GM ingredients.

In 2007, just when GM sugar-beet was heading towards US fields for the 2008 harvest, Hershey was urging farmers not to plant it.  The indications were that the Company had noted consumer resistance and had announced it would not use GM sugar in its products (see BEAT THE BEET - WHAT'S WRONG WITH ROUNDUP READY SUGAR BEET – News, March 2009).

Hershey has not traditionally been a big exporter to Europe.  However, in 2009, Hershey's 'Nutrageous' and other peanut candy bars started to appear on most supermarket shelves (see HERSHEY'S NUTRAGEOUS CHOCOLATE BARS - WHAT'S IN THEM?– News, March 2009).

Most of these were true American candy bars complete with GM ingredients.  However, non-GM versions of Nutrageous were available in some outlets.  The Company had, clearly, retained the capacity to produce non-GM candy.  Why it chose to flood a GM-unfriendly market with GM candy isn't known, but the most likely explanation seems to be the testing of the water in cahoots with UK supermarkets.

Another question raised by the GM candy is why Hershey was expressed so much early concern about GM sugar.  Nutrageous contains nine ingredients derived from GM plants: three of these are sugar; four are artificial sugars; one is lecithin; and one is an oil derivative.  Is it reasonable to worry about the sugar when there's so much GM corn and soya in there anyway?

Perhaps back in 2008 Hershey already had its sights on the European market, and realised the GM-jitters there warranted a dose of timely PR to brand itself as 'the good guy'.  Indeed in 2010, the Company established a new European subsidiary in London.

The story has just taken an interesting new twist.

ASDA has struck an “exclusive” deal with Hershey to sell its products from February 2011.  The deal is dependent on the candy being reformulated to contain non-GM ingredients, while items which can't be reformulated will be excluded.  Twenty-one lines, from solid bars to Reese's and Hershey Kisses will be stocked.

Besides reformulation, the transportation and storage of the ingredients will have been confirmed GM-free or cleaned before use with non-GM products.

The reason given by ASDA for demanding non-GM Hershey’s is that customers in the UK do not currently wish to see GM ingredients in these products.

If this is true, it suggests that the Nutrageous bars on supermarket sweet shelves aren't selling too well.

Alternatively, it could be just a PR stunt which ASDA deems politically useful at the moment.

In May 2010, in a Hershey-style shift of position on GM, ASDA very quietly dropped its non-GM animal feed policy on poultry and eggs (see News, May 2010).

ASDA's move to ditch non-GM chicken feed had to be kept hush-hush because, to paraphrase Joanna Blythman, British consumers refuse to swallow GM and will lose trust in retailers that stock it.  Ms. Blythman also suggests that in 2011, we must remind supermarkets of this loudly and often.  (See below for how to contact supermarkets.)


P.S.  Don't swallow the scaremongerers trying to tell you GM feed is running out and that going GM-free will cause food prices to escalate.  The world's biggest multiple retailer, Carrefour of France, has found GM-free feed to be guaranteed plentiful enough for it to label its animal products 'raised without GM'.  Higher costs of GM feed arise at present largely because the cost of segregation which falls, ironically, on the non-GM supply chain: even with this extra burden, the prices differential is not huge (at worst, a couple of pence on a dozen eggs).

Please do take action and also pass this information on to others.
Many thanks!