Just in case you didn't read it at the time ...

In April 2010, GM-free Scotland told the curious tale of how pro-GM agencies were HIJACKING THE VATICAN.

For some years the Pontifical Academy of Sciences, a body which debates scientific subjects so as to inform the Vatican on current science, seems to have been infiltrated by pushy individuals with a vested interest in promoting GM. After a number of unsuccessful attempts to manipulate the debate, some particularly pro-GM members of the Academy arranged a 'study week', entitled “Transgenic Plants for Food Security in the Context of Development' which took place in May 2009 in Rome. The attendees invited to the study week were limited to well-known biotech promoters who could be counted on to reach the right conclusions. According to the organisers, the 'study' week was “not standard science” nor “a balanced meeting ... (seeking) some kind of idiotic consensus”. 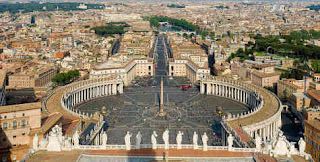 Without 'debate', 'balance' or 'standard science', the study week was clearly not a Pontifical Academy event. However at the time, the foregone pro-GM conclusion of the 'study' was successfully fed to the media as Vatican support for GM. This was done so cleverly that even the highly respected scientific journal, 'Nature Biotechnology', announced it, two months before the study week took place.

The misinformation was immediately corrected in the Catholic press, and things went quiet for over a year.

However, after all that trouble (and presumably expense) engineering the 'right' conclusions and attaching them to the Vatican, the organisers of the 'study week' have made another bid to capitalise on it.

In November 2010, 18 months after the study week in Rome, an 11-page final statement emerged.

The statement (predictably) recommended the easing of the “excessive, unscientific” restrictions on GM crops, and the promotion of such crops, especially in poorer nations. (COMMENT This conclusion is, of course, what the study week's organiser has been saying for years as he's tried unsuccessfully to persuade the developing world to save themselves with his GM vitamin-A-rich 'golden' rice: questions of the safety, acceptability and practicality of his invention are ignored as he blames over-regulation)

Apparently not learning from Nature Biotechnology's earlier gaff, the final statement was so successfully fed to the media, that another respected science magazine, New Scientist, reported the 'news' that “Vatican scientists urge support for engineered crops”.

Even without knowing about the previous PR effort, sharp eyes would notice some odd inconsistencies the New Scientist version of events. The “statement condemning opposition to GM crops in rich countries as unjustified” is first described as coming from “scientific advisers to the Vatican” (the scientific advisers to the Vatican are the collective members of the Pontifical Academy). The statement is then described as coming from “a group of scientists including leading members of the Pontifical Academy” (so, it didn't come from the Academy after all, but from something else with an undefined number of its members). It's then described as coming from 40 international scientists (clearly not the Pontifical Academy, which has some 80 members). Then, it's described as having been approved by the seven Pontifical Academy members who were at the study week (that's 12 percent of the 80 members of the Academy), and finally it's mentioned that “the Academy has yet to officially endorse the statement” (i.e. the Academy hasn't actually anything to say about it, and may never).

The same day, an award-winning reporter for New Scientist magazine posted an article on Nature's blog. The piece repeated all the some mis-information about a “meeting of the Pontifical Academy”

having “thrown its blessing” behind GM. As one blog commentator pointed out, the article was “wrong in almost every particular”. Also mentioned was the fact that the report in question wasn't published by the Vatican, but by the European Federation of Biotechnology (EFB), an organisation which describes itself as an association of academia and companies “interested in the promotion of Biotechnology throughout Europe and beyond”, and is clearly a biotech lobby organisation. The EFB official journal is 'New Biotechnology'. This journal somehow contrives to take “a scientific approach to non-scientific issues”, seemingly giving it a free hand to say anything about anything, including advising to the Pope on how to interpret God's Word (see Information Box below). The award-winning scientific journalist seemed surprisingly unaware of the nature of his source material, and at the same time uncommonly keen to put the pro-GM story in a place where it will be read by scientists.

Excerpt from the study week final statement:
As an example of how far the study week's final statement deviated from the Pontifical Academy's scientific advice, it advises on the interpretation of God's word: God apparently made us all stewards charged with altering the beings around our for our own nourishment using GM. Part of this particular 'finding' is reproduced below.
Faith, Scientific Reason and Ethics
For a believer, the point of departure for the Christian vision is the upholding of the divine origin of man, above all because of his soul, which explains the commission that God gives to human beings to govern the whole world of living creatures on earth through the work to which they dedicate the strength of their bodies guided by the light of the spirit. In this way human beings become the stewards of God by developing and modifying natural beings from which they can draw nourishment through the application of the methods of improvement. Thus ... they ... participate in the power of God and are able to build their world, that is to say an environment suited to their dual corporeal and spiritual life, their subsistence and their well-being. Thus new human forms of intervention in the natural world should not be seen as contrary to the natural law that God has given to the Creation ...
Note this insinuations that GM is “method of improvement” and genetic engineering can be used to make our food suited to our spiritual life as well as what you'd expect your food to do for you.
Like the previous attempt to spread news of the non-existent papal blessing on GM, the Catholic News Service immediately denied it. The Academy chancellor who was one of the seven Pontifical Academy members at the study week clarified the whole situation: “This statement is not a statement of the Pontifical Academy of Sciences because the Pontifical Academy of Sciences as such – 80 members – wasn't consulted about it”.

The appearance of an 11-page report 18 months after a conference, feeding the same mis-information to the media which had already appeared (and already been denied) at the time of the conference, can only be described as a PR stunt.

Whereas the stunt has been shown up for what it is in Europe, in American it continues to be milked.

Two weeks after the New Scientists article was trotted out, Iowa's Waterloo Cedar Falls Courier ran the headline “Iowan visits Vatican to share ag expertise”. It recounts how when leaders of the Catholic Church sought information about GM crops and their impact in developing countries, they turned to an Iowan for help. The Iowan in question was one Andrew Apel. Apel was one of the 40 attendees at the May 2009 study week, invited by the organisers because of a shared vested interest in GM. His topic at the study week was “Financial Support of Anti-GM Lobby Groups” and seems to have been a disingenuous effort to lay the blame for the lack of GM-enthusiasm on government and private enterprise payments to green groups.

The Iowan described himself as “an independent source of objective information upon which the Holy See and its various bodies can draw”, and he informed “Farmers who grow GMO crops (that they) can now look at the proceeding (of the pro-GM stitched-up study week) and know they are in line with humanitarian efforts and the teachings of the church – in the opinion of 40 people”. He doesn't of course add that the Holy See and its various bodies haven't drawn on his 'independent' and 'objective' information, and indeed never asked for it. Neither does he mention how many of the 40 people whose opinion it is that GM crops are part of 'humanitarian efforts' and in line with 'the teachings of the church' were actually inventors of GM crops or had close ties to biotech companies.

Interestingly, just after Apel had fed his GM spin into the US press, Wikileaks came up with a related cable from the US Embassy in Rome. It reveals that in 2008 the Vatican's most prominent cheerleader of GM, Cardinal Renato Martino, was suddenly “through pushing the (GM) issue”. Apparently the good Cardinal's reason for promoting GM in the first place was nothing to do with moral imperative, but everything to do with diplomacy: he was only advocating GM crops to smooth relations with the American government after his vocal, and presumably embarrassing, disapproval of the war in Iraq.


OUR COMMENT
The most interesting lessons here, all of which have been mentioned before but are worth repeating because they're bound to keep on happening, are:
If you want to know how to get paid for your anti-GM lobbying, you'd better ask the Iowan because we've no idea. On the other hand, you might be content to continue your campaign just for the sake of your health and for the future well-being of the world your children will inherit.
SOURCES: