P-free pigs in the pipeline 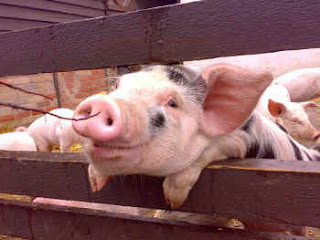 For over a decade, scientists have been trying to create an environmentally friendly pig, using genetic transformation.

The problem with pigs is that their manure contains high levels of phosphorus (P), some of which inevitably makes its way into waterways.  Once there, it causes rampant algal growth, or 'blooms', which use up all the oxygen, choke out all other life, and create lifeless 'dead' zones around them.   The phosphorous must also be cleaned out of our own water supply, at a price.  And, pigs excreting lots of P smell.

Tracking the problem back a stage, scientists pin-pointed the P problem as lying in the pigs' digestive system.

Ruminants, such as cows and sheep, eat grains and legumes.  The digestive system of these animals is designed to encourage the enzyme activity needed to break down these types of feed; in particular, the enzyme 'phytase' digests the abundance of phosphorous-rich substances there.  Pigs, on the other hand, root around and eat just about everything, except grains and legumes.  In doing this they are sensible because pigs can’t generate phytase, and can't digest them.

Our intensively-reared pigs are now fed on intensively-grown high-protein crops, such as GM maize and GM soya.  To digest such materials, the animals need phytase.

Although farmers often add a phytase supplement to pig-feed to make up for the natural lack, the strategy is of limited success.  What we end up with, therefore, are pigs which have an awful lot of undigested phosphorous-rich material in their manure, which leads us to environmental damage, plus clean-up costs, plus smell.

Genetic engineers have homed-in on solving this problem at its digestive source.  They have created a GM pig which produces its own phytase.  (Nothing like a cow.)  The phytase-generating gene is copied from an E.coli bacterium, and because bacterial genes don't work too well in pigs, they’ve been attached to mouse DNA to switch them on.

The prototype P-free pigs are now running around and grunting in Canadian laboratories, and are reported to be excreting less P.  According to their creators, the GM pigs look, sound, behave and taste (so presumably someone's been eating them) like a 'normal' pig.

Although it will be many years before the novel pigs are considered for approval to enter our food chain, the PR is already on the trot to prepare the ground: the pigs have been dubbed “Enviropigs” and are touted as being cheaper and greener to produce.

Do pigs really have a deficient digestive system?  Have these poor inadequate beasts been polluting our planet with half-digested excreta for ever?

The answers, of course, are no and no.

Pigs have a traditional role in many cultures because their digestive systems thrive on human scraps.  One pig in the yard doesn't cause algal blooms, nor unpotable water, nor stench.  Non-traditional pig-rearing now feeds them a restricted diet of high-phosphorous commodity crops such as (GM) soya and maize, and packs the pigs together in a restricted space, in their thousands.

Enviropigs seem nothing more than a clever trick to redesign an animal to shore up an unsustainable, intensive farming system.

The GM pigs are also diverting decades of scientific attention and resources into a product with little more than finger-crossing that consumers will ever buy it.

OUR COMMENT
We seem to be clever enough to put genes into a pig to radically transform its gut physiology, purely so that we can feed it GM plants from the other side of the world.

At the same time, one-half of American and European food, most of it very acceptable to the porcine palate, goes to landfill, right beside all those pigs jammed in their styes.

How clever is that?

Modern scientists are clever enough to provide a GM fix for a pile of problems we created in the first place.  Would this cleverness not be better directed at removing the problem?

This little P-free pig is a long way from market and may never get there, but a lot of time and money is being spent on it nevertheless.  NOW is the time to ask for sensible use of funding for food-based research.
SOURCES:

Email ThisBlogThis!Share to TwitterShare to FacebookShare to Pinterest
Labels: pigs