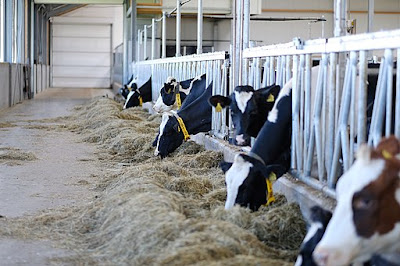 The risk to health from artificial antibiotic resistance genes being used as markers during the creation of most GMOs was recognised in Europe back in the 1990s. However, lulled by mathematical modelling suggesting horizontal gene transfer (HGT) would never be significant in a complex, natural environment, the problem wasn't taken too seriously [1].

A warning shot of how GM could promote superbugs was fired in 2013 when man-made antibiotic resistance genes were found in six major rivers in China [2]. But still, it wasn't taken too seriously.

Neither live GM bacteria nor GM DNA are legal in a feed additive in Europe, but both were found in vitamin B2 supplements from China in 2014. This was the same year that the European Food Safety Authority (EFSA) had approved the supplement. Rather than implement an immediate ban, the European Commission scratched its collective head for two years before asking the EFSA to carry out a new risk assessment.

A full analysis of the GM microbe was published in 2017. It revealed the presence of multiple, artificial genes conferring resistance to clinically important antibiotics, but commented that this was assumed "an exceptional and singular case" [3].

Accordingly, the European Commission sat on its hands until September 2018, when it ruled that animal feed products containing the contaminated GM-derived vitamin B2 supplement must be removed from the market.

Since it's EU member states' responsibility to ensure unauthorised products are not being sold, national food safety authorities have been obediently scrambling to trace any tainted stocks (although they have until mid-2019 to fully implement the ban).

In summary, elimination of this harmful GM product has been a five year process, despite the European Food Safety Authority (EFSA) advice that the supplement "poses a risk for the target species (livestock), consumers (us), users (farmers) and the environment (everything else)" due to the presence of genetically modified genes conferring resistance to antibiotics "of human and veterinary importance".

Just two months after the ban was announced, Belgium reported viable GM bacteria in its stocks of vitamin B2 supplements.

This feed additive is distributed by a huge EU feed company. Because it's added to feed in very tiny amounts, the eight tonnes imported from China may have contaminated up to 1.6 million tonnes of feed. Between April and June before the ban was announced, GM-contaminated feed had been sold in Poland, Italy and the Netherlands, while consignments of the GM contaminated supplement have also been sent to France, Germany, Norway, Russia, Finland and Iceland.

"This case shows that the EU Commission is not taking the risks associated with genetically engineered organisms seriously enough. These bacteria were able to spread for several years in animal farming environments, and also pass their resistance on to other disease-causing microbes. This is in effect a massive non-approved release of genetically engineered organisms. It should have been stopped as soon as possible without delay".


What do we want? Full disclosure of all engineered DNA constructs to enable full traceability, plus monitoring for GM content, plus full labelling of the source and nature of all substances which end up in our food chain.

When do we want it? NOW (not five years from now).

Regulators have been so busy blaming vets and medics for over-prescribing antibiotics, and farmers for poor animal welfare standards, while convincing themselves that horizontal gene transfer either doesn't happen or is a vanishingly rare occurrence, they may be responsible for tens of thousands of deaths from previously treatable infections.

Horizontal gene transfer plus overuse might not be the only significant drivers of antibiotic-resistance, check out MEDICINE'S CLIMATE CHANGE - coming soon, February 2019.