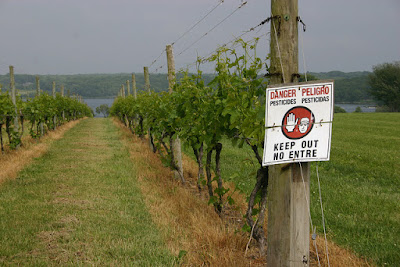 The next 'must-have' for our food promises to be 'clean food labels'.

Amidst growing consumer concern about chemical residues in their food, organic and all-natural foods are growing in popularity and more than half of US adults are avoiding artificial ingredients and preservatives. Public awareness of the agrichemicals in their food has been sharpened by the cancer scare surrounding Roundup weedkiller and its active ingredient, glyphosate [1].

Agriculture is one of the worst polluting industries on the planet, and GM crops, all designed for use within, and to expand, the chemical-based agricultural business model, are a continuing pillar of the problem. A huge proportion of GM crops has been transformed specifically to enable spraying with glyphosate, and many now withstand other, more obviously harmful, herbicides, or generate their own artificial insecticides.

GMOs are also a source of 'natural' supplements, food additives and processing aids [2,3,4].

Are consumers right to be wary?

A recent study found that every kilo of conventionally grown apples creates health problems costing 21 cents due to the effects of pesticides and fungicides. Those 'healthy' red-fleshed GM apples [5] and pristine Arctic GM apples [6] will be just as unclean as any other.

Regulators depend on the manufacturers to carry out their own safety studies, but biotech and chemical companies' primary concern is regulatory compliance, not public health. They can 'prove' the safety of their products by, for example, carefully designed science and PR [7]; clinical trials are never carried out. The bottom line is that the test results submitted to regulators will certainly establish that no (healthy) man nor (healthy) beast is likely to drop dead after exposure to a substance, but chronic diseases, such as cancer, which can show up in just one month or can take twenty years to emerge, are not covered.

In the absence of anything more scientifically accurate, we're forced to fall back on population studies.

Surveys of farm workers have revealed increased cancer in groups most exposed to pure agrichemical formulations.

A very large epidemiological study carried out in France during 2009-2016 has provided some other worrying findings.

Using the self-reported level of consumption of organic food as an indicator of pesticide exposure, the survey suggested, overall, organic food eaters were 25% less likely to develop cancer. The reductions were particularly prominent in the case of post-menopausal breast cancer (one of the most common types), non-Hodgsons' Lymphoma (one of the most prevalent unusual cancers in farm-workers), and all lymphomas (blood cell cancer). The lymphoma finding is consistent with previous studies of occupational exposure. Interestingly, the risk reduction was more evident in obese people, a group recognised as having a high intrinsic cancer risk. No significant links were noted with bowel or prostate cancer.

The study does not, of course, prove any cause and effect, but the authors were clear:

"Although our findings need to be confirmed, promoting organic food consumption in the general population would be a promising preventative strategy against cancer".

Retailers, who risk facing a commercial firing squad if they're deemed to be selling their customers cancer, are scrambling to avoid any consumer backlash and litigation. Homebase and B&Q DIY stores are reviewing their glyphosate-containing garden supply lines. In the US, General Mills has removed the "100% Natural" label from its oat products (which have 450 parts per billion unnatural weedkiller), and is facing legal action for deceptive business practices. Also, in America, a three-monthly testing programme for "Glyphosate Residue Free" certification is doing great business.

In Britain, without any GM crops to service, use of glyphosate has nevertheless increased by an astonishing 400% in the past twenty years, and one-third of our crop-growing land is now treated with glyphosate. While at least four European countries (including France and Germany) are banning or restricting glyphosate use, our National Farmers' Union (NFU) is lobbying hard for glyphosate to be retained, and the government seems to be sitting on the fence. UK dependence on glyphosate is such that, as reported by Oxford University business analysts, ditching this one weedkiller would result in a loss of nearly £1billion annually to our economy, a one-fifth reduction in wheat production and a more than one-third reduction in oilseed rape, while wiping £930 million of our GDP.

Comment. The business analysts presumably failed to factor in the cost of cancer treatment, the cost of lost work-hours due to ill-health, or the cost of the death of a breadwinner or carer.

The biggest scientific problem up until now has been the difficulty in proving how much of an agrichemical a person has actually consumed. You can't test everything a person eats. Blood tests only show exposure over the last two to three days. Urine tests only show exposure over the previous two to three weeks. However, recently developed pesticide testing on hair, which demonstrates exposure over a period of three to four months looks set to change all that. Hair is easy to collect, transport and store, and enables continuous cost-effective biomonitoring over a whole year.

Results of hair analyses across the EU have so far indicated that on average 60% of us contain pesticide residues, with a top incidence of 84.6% (Wales!).

How's that for starters?

Note.
The French epidemiological study involved nearly 70,000 adult volunteers, 78% of whom were women, mean age at baseline 44.2 years old. Cancer incidence within four years of the baseline was recorded. Populations at the top and bottom quartile of organic food consumption level formed the main comparison. This minimises the inevitable bias of self-reporting and creates a clear distinction between the two dietary groups compared. Confounding factors, which are part-and-parcel of all epidemiological studies were dealt with as comprehensively as possible in line with all such surveys.

Note.
Glyphosate wasn't part of the EU hair survey as the test had not, at the time, been validated for herbicides. However, now that the tests for weedkillers are ready, a very small pilot study of ten hair samples from around the world has shown seven contained glyphosate, six contained glyphosate break-down product 'AMPA', and three contained glufosinate (another GM-related favourite). These results were "surprising to everyone involved" as they are painting a much grimmer picture than did the previous urine tests.