GM with the 'wow' factor 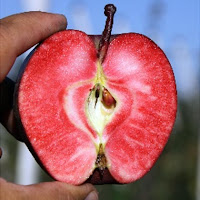 The next innovations in the fresh food sector promise to have a "wow factor": colour like you've never seen before, taste and smell to die for, a delightful texture, all contributing to a longer, healthier life for the consumer. If this isn't enough, add in enhanced storage and convenience, and even beneficial to the environment.

The health benefits stem from the extra, health-promoting red, blue and orange pigments these new foods will have, plus the wow factor which will make us eat more fresh fruit and veg. The environmental benefit comes from our resulting reduced consumption of environmentally unfriendly animal produce.

Are you impressed? GM Watch call it "shameless hype".

All the claims are familiar from the GM debate twenty years ago, with the added modern slant that gene editing is somehow different from genetic modification, and somehow challenges our perception of what is natural and what is not.

These miracle "novel consumer traits" involve the modification of 'MYB' genes which are a huge family of genes present in the genomes of all plants and animals. They are characterised by generating proteins which attach themselves to DNA and regulate the expression of other genes. MYBs are essential to ensure genes are active (or inactive) in the right cell, at the right time, and in the right amount, throughout the life of the cell or organism.

The first use of MYB editing is underway to produce (wow) red-fleshed apples in which the fruits' natural ability to produce a red pigment in the skin is forced to happen in the 'void' of the inside of the apple too.

As GM Watch points out, anyone who has access to heritage apple crops may well be familiar with the red-fleshed apples we already have (and they're delicious).

Oddly, conventionally bred red-fleshed apples are already in the pipeline. These come from a breeding programme run by some of the same New Zealand scientists that are modifying the MYB genes. Or, perhaps not so odd: the MYB editing crew have more than one patent on their (wow) red-fleshed inventions.

The MYB genes were discovered due to a mis-expression of one such gene in animals which lead to disease (cancer). Plants, of course, need correctly operating MYB genes for health too.

Some (or many, or most, or all) MYB genes are part of a functional dynamic balancing act between opposing genes. This suggests the outcome of any genetic modification which disrupts any one of them will be supremely unpredictable.

Modifying genes directly involved in a structural or physiological process is bad enough, but disrupting the fine genetic control needed for resilient crops sounds like a recipe for catastrophe.

Draw all this to the attention of our regulators.