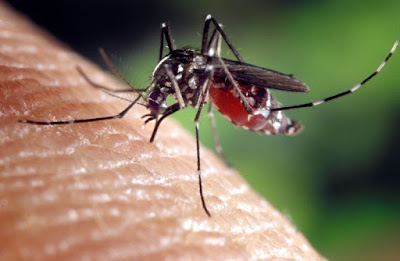 Mosquitoes can't bite you to death. In fact, half of them don't bite at all: only the females have a blood lust, and that's only when they're incubating eggs. Even then, most often, they'll home in on some other warm-blooded, non-human blood source.

Nevertheless, the opportunistic viruses and parasites able to hitch a ride from person to person in a mosquito kill some 850 thousand of us each year.

Unable to control the pathogens, we've been waging a chemical war on their vectors since insecticides were invented: spraying our houses, coating bed nets and bombarding the watery mozzie breeding-grounds. Perhaps more rationally, this practice has been successfully supplemented by removing or covering still water near human habitation to drive the insects elsewhere to breed.

The trouble is that mosquitoes are fast-breeding and highly adaptable. This means emerging strains which are resistant to the chemicals, or have eggs able to survive without water, or whose larvae are able to thrive in minimal water. It means an ability to spread to different climates, and that the more we throw at them, the smarter they become about dodging.

Hopes are now being pinned on GM mozzies to wipe out entire natural populations.

Trials have been underway for some time which release huge numbers of sterile males in test areas with the aim of reducing the next generation to zero. Studies of this method have been conducted since 2010 in the Cayman Islands where the long-term director of the 'Mosquito Research and Control Unit' (MRCU) was a staunch advocate for GM. Hundreds of thousands of CI dollars have been spent releasing millions of the GM insects, and tens of thousands of CI dollars were even devoted to fighting local activists concerned about the risks to the public and their environment.

Interestingly, when the MRCU director left the post near the end of 2018, the new director informed the Cayman Island health ministry that the GM mosquito trial wasn't actually working, and it has been abruptly terminated.

As the first GM trick wobbles, there's another even fancier one looming: GM mozzies with a gene-drive for self-annihilation. These unnatural beasties harbour an artificial molecular device which inserts itself into all offspring and ultimately wipes them all out [1].

Gene drive techniques are in their infancy, but, with heavy financial backing from the Gates Foundation, a preliminary trial is underway in Africa.

Twenty-five villagers in Burkina Faso are being paid the equivalent of about 55 pence an hour to stay awake with their legs exposed for six hours during the night when mosquitoes are most active. The "volunteers" are expected to try to capture any mosquito which comes to bite them. Apparently, the financial incentive is "to compensate for fatigue and time given", and the villagers have been warned they could be "infected by malaria or another sickness transmitted by the mosquito". They've also been assured they will be tested regularly for malaria.


What could be achieved by this tiny trial, which may or may not capture the offending mozzies is very obscure. It is, however, an ultra-cheap way to collect "baseline" data with so many inherent uncertainties it could probably be used to prove or disprove anything.

One Nigerian molecular geneticist and malaria specialist, Ify Aniebo, who admits to being "in absolute awe of (GM) technology", nevertheless expresses real concerns about the level of GM-related unknowns, especially in the face of the lack of infrastructure in Africa to address problems arising.Aniebo points out that some countries have managed to eliminate malaria without GM, and asks:


"Why spend billions of dollars on developing genetically modified insects when the money could be directed towards (long term and sustainable) environmental engineering projects that hinder the ability of mosquitoes to breed in the first place?"

Australia is pursuing a fifth approach to the problem, also with finance from the Gates Foundation: keep the mosquitoes and get rid of the diseases. This tantalising possibility is offered by the 'Wolbachia' bacterium, a bug known to be able to infect some mosquito species where it inhibits the transmission of viruses, and can induce reproductive disorders in the insects and reduce their lifespan. The trick is to breed novel (non-GM) Wolbachia strains adapted to the problematic mosquito species and able to exist stably in the population, keeping the diseases at bay without creating a species-gap in the ecosystem. Some very bright non-GM-obsessed scientific minds are putting their attention on the possibility of using Wolbachia for malaria prevention too.

The first stage of this approach is to study how Wolbachia-infected mozzies could be deployed on a usefully large, city-wide scale. So far, the answer seems to be to engage with the people in the area and give them mosquito-rearing kits with food and mosquito eggs to leave in a container of water in their backyard. So far, there's been no objection nor any request to pull the plug on the trials.


All annihilation-by-GM approaches suffer from the same fundamental problem. 'The mosquito' isn't a single organism, it's a whole range of loosely related, but far-ranging insects which are pollinators and form an important food source for fish, frogs, birds and bats. If you eliminate one species with a highly species-targetted technique, something will fill the gap; if you eliminate the plant- and animal-species dependent on the mosquitoes you've wiped out, something will fill that gap. These 'gap-filling somethings' could be harmful to humans, to animals, to our crops, to our water, and even to our soil.

Wolbachia is also species-specific, but once introduced successfully, it will naturally infect the whole population without creating ecological gaps.

Gene drives seem to be the most commercially lucrative option and, of course, preferred by Big Biotech. However, the ethical questions raised by gene drives are huge. Check out GENE DRIVEN POLLUTION. Coming soon - February 2019.