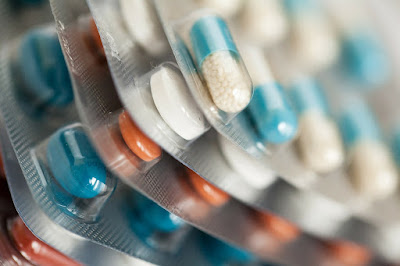 "Antibiotic resistance in our pathogens is medicine's climate change: caused by human activity, and resulting in more extreme outcomes".(Kurenbach).

These 'extreme outcomes' include conservative estimates that tens of thousands of Americans die each year due to previously-treatable, but now antibiotic resistant, infections. Warnings of this threat go back half a century.

One factor escalating multiple antibiotic resistance is the horizontal gene transfer of engineered marker genes from GMOs to the microbes in their environment [1].

Science is uncovering some uncomfortable interactions between pathogens and the many GM-linked chemicals to which we're legally exposed.

For example, central to the processed food industry are chemical emulsifiers used to make all that GM maize, GM soya and GM vegetable oil more 'food-like'. Emulsifiers create a very favourable medium for the evolution of antibiotic resistance [2]. Add to this the herbicidal formulations to which most of us are now exposed through our food and environment include 'surfactants' which stimulate antibiotic resistance in the same way as food emulsifiers. GM crops resistant to herbicides have increased the use of surfactants by many orders of magnitude.

A recent study showed that some bacteria simultaneously exposed to antibiotic drugs plus glyphosate or dicamba (both now widely used on GM crops) could evolve antibiotic resistance 100,000 times faster. It may also be significant to this super-fast evolution that some antibiotics and some herbicides are mutagens.

Although herbicides, such as glyphosate, can themselves be harmful to some pathogens, this isn't helpful in treating infections. The study found that whether the antibiotic effect was stimulated or reduced by herbicide exposure, both increased the development of resistance. A large part of the problem seems to be that, in a highly complex, natural, fast-growing microbial ecosystem, chemical exposure causes shifts in composition of the population in which any resistant mutants will quickly become dominant. A lose-lose situation for sick humans.

The authors point out that some 8 million chemicals are currently commercially manufactured. "They are not regulated for effects on antibiotic resistance and not tested for such effects"

Author Jack Heinemann said combining some chemicals with antibiotics "can be like trying to put out the raging fire of antibiotic resistance with gasoline". Neither the reduced use of antibiotics as currently proposed, nor the elusive discovery of new antibiotics may be sufficient strategies to avoid a "post-antibiotic era".

Even the UK Health Secretary has warned us that resistance to antibiotics "is as big a danger to humanity as climate change or warfare".


How to get this insidious threat from our agriculture and food under control?

A good place to start is to 'go natural': organic and agroecological farming, no GM in any form, and cook your own fresh, local produce. Since the government has noticed the problem, put pressure on it to support the solution.