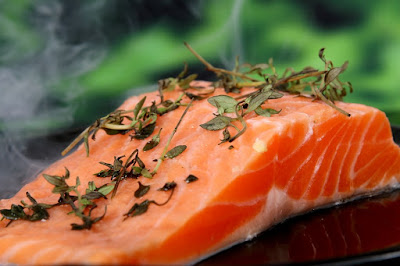 The earliest suggestions that certain 'fatty acids' (the building block of oils) might be, like vitamins, vital to health in small quantities were ridiculed by the scientific establishment: oils were viewed as simply a concentrated source of energy for the body and devoid of any role in health promotion.

Science has moved a long way since then: fatty acids have been implicated in the healthy function and development of cells and tissues at every stage of life.  Two fatty acids in particular, 'EPA' and 'DHA' omega-3s*, are the subject of an "impressive documentation ... related to health benefits” with special reference to the heart and cardiovascular system.  Despite this, "the cellular and molecular mechanisms for (EPA and DHA) action are still insufficiently understood" (Gil).


It seems however that human beings aren't very efficient at producing their own EPA and DHA.  Therefore, like vitamins, these omega-3s have a recommended daily intake.  Because the aquatic food chain, based on algae which produce EPA and DHA, is our only significant source of these omega-3s, the recommended daily intake is set at two portions of fish per week, one of them 'oily'*.

Around 50% of fish and seafood for human consumption is now produced in aquaculture farms.  Top of the market value in this field is salmon, of which Scotland is one of the leading producers (alongside Norway, Chile and North America).

Unfortunately, large-scale salmon farming in its current form is proving problematic.  Salmon are carnivorous, but feeding fish on fish to produce fish is unsustainable, and some two-thirds of the feed for farmed fish has been replaced with vegetable-matter supplemented with ten percent fish-oil.

Salmon can make all the EPA and DHA they need for themselves, so on a natural diet high in the omega-3s, they will accumulate the oils in their flesh.  They grow and live quite happily on the low-fish diet they're given in farms, but are now failing to provide the EPA and DHA nutritionists think the human consumers need.  In the last decade, omega-3 levels in farmed salmon have halved.

Hardly surprisingly perhaps, scientists in the Institute of Aquaculture at Stirling University have been collaborating with GM crop scientists in Rothamsted Research in England to develop plant-based 'fish-oil' for salmon farming.

Rothamsted has been busy the last few years creating and field-testing successive GM version of 'camelina' oilseed plants, each with increasing levels of omega-3s.  Stirling University has been busy running salmon feeding trials on the Rothamsted creations to see if the fish grow well, stay healthy, cope with environmental stress, and accumulate useful amounts of EPA and DHA in their flesh.

The most recent GM 'fish-oil' offering has seven inserted genes plus a marker gene for identifying successfully-transformed cells.  It contains over 25 percent of the required omega-3s, and has proved "highly efficient" in achieving salmon with human-friendly flesh.  In short-term salmon feeding trials, "only mild effects" on the metabolism of the liver and intestine of young fish were noted.

The next phase, just started, is to see whether this GM success story will hold true in real-life farms when the fish are fed the GM oil diet until they reach market weight (about eight times the size of the salmon in the preliminary experiments).  It also remains to be seen if the findings translate to other species of farmed fish.

Using prime agricultural land to feed fish doesn't sound like the most sustainable way to feed the world.  As GM Watch points out:

"It is unclear why fish diets cannot be supplemented directly with non-GM algae, which is rich in omega-3 oils, rather than complicating the process by  engineering plants to produce the oil, then extracting the oil, and feed the fish on that".

Algae fermenters are already the source of omega-3s for infant formulae, dietary supplements, pet foods, the food and beverage industries, and pharmaceuticals. ExxonMobile is planning to produce 10,000 barrels of algae-based biofuels a day by 2025: a suitable strain of algae has already been isolated and work on production in outdoor ponds (using sunlight as the major energy input) is underway.

However, genetic engineers have dismissed this direct source of omega-3s as having "biological and technical issues" which prevent it from being cost effective.  Oilseed crops which already dominate global food oil production have a well-established infrastructure for cultivation, harvest, processing, distribution and marketing.  Oilseeds don't contain EPA and DHA, but they do contain a natural chemical precursor which, with a bit of fancy metabolic engineering by genetic engineers, can be converted to the required omega-3s.  They are also patentable, agrichemical industry friendly and biotech industry friendly.

In the rush to stuff GM omega-3s into people for the sake of their health, the actual, measured health of those people and of other, non-human, consumers aren't getting much attention.  This point will likely be ridiculed by the scientific establishment, but the camelina has been metabolically engineered with a string of artificial genes to produce large quantities of two substances totally alien to it, plus all the necessary alien intermediate biochemicals.  EPA and DHA themselves are bioactive compounds critically involved in key physiological functions, but poorly understood.  Harmful novel by-products, such as omega-3 analogues, could be catastrophic to our long-term health.

Brexit is likely to become an excuse to rush down the GM fish-oil route.  Suggest to your regulators that some research funds could usefully be channeled into the development of fish-oil alternatives which are truer to nature, easily quality-controlled, non-GM, low impact on agriculture and on the natural environment, and embedded in a circular economic and energetic system.


*Note on oily fish.
Oily fish include salmon, trout, mackerel, herring, pilchards and sardines. One 'portion' is 5 oz. or 140 grams.