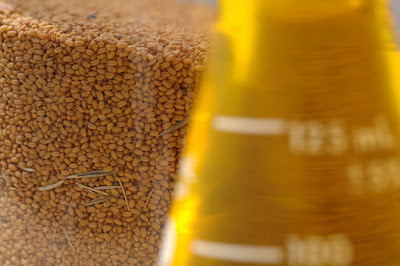 Concerns about eating salmon stuffed with GM omega-3 oils may be over-blown [1], but the risks to the environment are very real.


GM camelina oilseed has multiple artificial genes inserted to make it generate fish-type oil.  The plants are substantially different from any natural crop plant and constitute an entanglement of aquatic and terrestrial ecosystems.  Compare the two:

·         At the base of aquatic ecosystems are algae, tiny plant-life which produce 'EPA' and 'DHA' omega-3 oils*. These oils move up through the aquatic food chain into fish.
·        At the base of terrestrial ecosystems are green plants which produce 'ALA' omega-3 oil*.  This oil moves up through the terrestrial food chain into herbivores (such as insects, birds and mammals) and then into carnivores (such as predatory mammals and birds, and humans).  A few predators, such as humans, eat fish along with the accumulated EPA and DHA from the aquatic food chain.

Herbivores and non-fish-eating carnivores aren't naturally exposed to much EPA or DHA.  So what's going to happen when (not if) they encounter GM fish-oil crops growing in the fields?

Backtrack to the properties of EPA and DHA: these are biologically active substances in animals; they are known to be critically involved in, for example, growth, early development, reproduction, cognitive (behavioural) health, lifespan and immunity.

Science has already shown that cabbage white butterflies suffer wing deformity and dysfunction if their caterpillars have fed on GM 'fish-oil' camelina, and signs of toxicity were noted at high doses [2].  Adverse effects on a pest might seem quite beneficial, but what will be the effects on all other wildlife which eats the GM camelina and on the wildlife which eats them?

Camelina would have to be grown on a very large scale to supply fish farms with realistic quantities of oil.  Also, the plant has wild relatives in the UK and elsewhere which can be expected to acquire the novel means to generate 'fish-oil' by cross-pollination.

Besides camelina, grain distributers, Cargill, and biotech company, BASF, have joined forces to patent and develop GM fish-oilseed rape [3], a crop which is well known for uncontrollable spread.

Check out the properties of EPA and DHA above and play the 'what if' game.  The risks encompass everything from beneficial insect wipe-out to total collapse of the birds and other animals which feed on them, alongside super-fast-growing, super-reproducing, long-living pests.  Environmental imbalance with catastrophic consequences is more than a vague, idealistic, science-free notion, but no one's talking about testing.  And ecosystem effects can take years to measure.

*Note on fatty acids.
EPA is 'eicosapentaenoic acid', DHA is 'docosahexaenoic acid', ALA is 'alpha-linolenic acid’. Chemically, these are different types of 'omega-3 long chain polyunsaturated fatty acids' sometimes referred to as 'LC-PUFAs'.