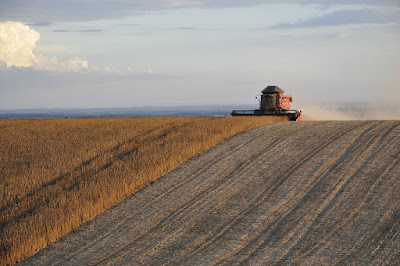 In 2016, organic food sales in Brazil were mushrooming by 20 to 30 percent a year.  At the same time, some 70 percent of organic produce was being exported to Europe.  Farmers there recognise that "Growing organics is the future", and the people are increasingly "wanting healthier food free from pesticides".

Were it not for the alliance between the government and Big Agriculture, which is driving the economy, and the supermarkets, which are controlling the food supply system, organics would be a key growth industry.  Instead, it remains a tiny fraction of the whole, swamped by Big Ag's desire for GM crops and their supporting chemicals.  Supermarkets, of course, promote cut-throat competition amongst their suppliers, and the 'winners' are the unrestrained fraudsters passing off conventional pesticide-laden food as 'organic'.

Faced with this scenario, the Brazilian government is busy pushing through two far-reaching pieces of legislation.

First on their agenda is a bill to streamline and modernise the pesticide approval process by severely reducing the role of the health and environment authorities, and handing the job over to the Agriculture Ministry.  This will by-pass the need to deal with expensive safety questions, and puts chemical regulation in the hands of a ministry closely allied to the companies profiting from chemical use.

Second on their agenda is a bill to ban the sale of organic produce in supermarkets.  This sledgehammer approach to prevent food fraud will by-pass the need for an expensive and properly policed validation system for organics.  It also eliminates GM's worst enemy, organic agriculture.

These measures are clearly in the interests of Big Ag, but are being 'sold' as a boon to the consumer and to the world.  By allowing newer, (allegedly) safer pesticides to be approved more quickly, Brazilian farmers will (allegedly) be able to discontinue the use of older, (allegedly) more toxic ones and produce "even safer food".  One congressman declared "The use of pesticides is paramount to guarantee large-scale production which feeds Brazil and the world.  Without these substances we would have plantation losses and food shortages".

The reality is that these 'newer, safer pesticides' are a fantasy [1], and that the chemical approval process in Brazil takes years instead of months not because it's old-fashioned or any more cumbersome than in any other country, but simply because it's cash-starved and doesn't have the personnel nor facilities to function*.  The other reality is that most organic farming is local and self-accredited because the government won't fund the expansion of pesticide-free agriculture.
Recently, it was revealed that over 80 percent of new mothers in Brazil have glyphosate herbicide in their breast milk.  The finding applied equally to populations in areas of high and low agricultural activity. Glyphosate is sprayed on most GM crops and, because it's becoming increasingly ineffective, other more toxic chemicals such as paraquat are added to the mix*: if these ladies are being routinely dosed with glyphosate, they must be exposed to other agri-chemical nasties too.

Screening by regulators in 2014 showed much of the food grown and sold in Brazil violated their national regulations: 29 percent of food samples had residues which either exceeded allowed levels or contained unapproved pesticides.  While Big Ag is laughing all the way to the bank, the Brazilian people, their children and the unborn are getting little choice but to eat and bask in pesticides.

The new legislation is likely to be finalised in 2019.

Brexit looks set to be very expensive to the public purse, and safety controls costs a lot of money: it's cheaper to pass laws which obviate the need for control than to put the controls in place.  This is likely to be as true for GM foods as for organic standards and agri-chemicals.

Brexit could set us on the same Brazil-style slippery slope to placing industry in the driving seat, cutting corners in safety controls, and ever-more lax legislation.  Be prepared to keep on the case for safe food, a safe environment, and a safe future for your children.

By law, chemicals are supposed to be reviewed in no more than 120 days. In practice it can take several years. This is because there are fewer than 50 scientists employed to do what comparable agencies in America and Europe have hundreds of scientists to do. In 2015, Brazil had a backlog of more than 1,000 chemicals awaiting review.

Paraquat is banned in the EU, is subject to restrictions in the USA and has been phased out in many formulations in China.