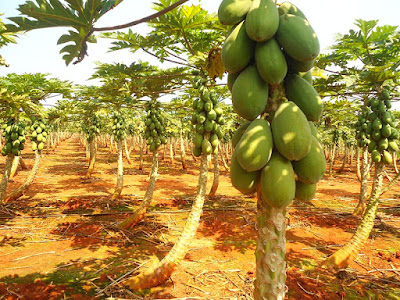 Papaya is a short-lived perennial crop. Under ideal conditions, the trees begin to bear fruit within months of planting and continue profitably for three years.  This provides a valuable non-stop harvest.

The greatest single threat to papaya production globally has long been considered papaya ringspot virus (PRSV).  This rapidly spreading disease devastates yield and fruit quality.  In the absence of any naturally-resistant strains for conventional breeders to tap into, genetic transformation is viewed as "the most effective approach to prevent and control PRSV".  The favoured GM trick is to insert a vital PRSV gene into the papaya which has the effect of silencing that vital gene in the virus.

US regulators who assessed GM papaya for growing in Hawaii* determined that the trees would not foster a new strain of PRSV.

Since 2006, China has been growing GM papaya with resistance to all of the three common strains of PRSV found there.  In South China, the GM version accounts for 85% of the area planted to papaya.

Resistance to PRSV was good during the early years, but by 2012, the first signs appeared that the GM strategy was failing.  DNA analyses have shown that the PRSV now infecting Chinese papaya is "highly differentiated" from the previous strains recorded in the region.  The observed viral changes were found to have increased with time and with the number of GM papaya trees planted.

Artificial genes aren't the only thing that's been tried to create disease resistance in papaya.  Plant breeders in the Philippines have been trying for decades to coax papaya to hybridise with a somewhat related species of tree known to have good resistance to ringspot virus.  Such evolved resistance to a virus is multifactorial: there's little scope for the sort of rapid, simple adaptive change in the virus as has happened in response to the GM quick-fix crop.  In 2011, the first real success with commercial potential was published, and, now that the technique has been refined, progress should speed up.

These papaya-non-papaya hybrids aren't, of course, 'natural'.  Clearly, they should be safety-tested like any other novel food plant.  However, they don't have any weird humanly-altered DNA, and they only grow and reproduce because they're comfortable in their new skin.

The GM reality is that, given a highly diversified pathogenic particle with an intrinsic capacity for fast-change in the context of a large-scale, permanently standing, un-diversified crop, and a simple one-track genetic change forced upon the plant, the evolution of resistance in the virus is fully predictable.  We're looking at a six-year success story followed by x-years of crop collapse until the next GM papaya quick-fix emerges from the lab.

All the signs are that papaya is top-heavy on both resources and wastage [1], but no one's talking about crop diversification to reduce pest pressure [2].  What's going to win: biotech-friendly, short-shelf-life, patented GM papaya, farmer-friendly hybrid papaya-non-papaya, or a fundamental agricultural shift?  Time will tell.

*American regulation classifies these GM papaya as 'pesticides' and assesses them as it would chemical pesticides.