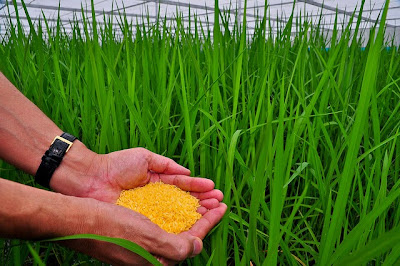 Two years ago, a group of Nobel laureates published a letter in support of "Precision Agriculture (GMOs)", or more specifically, Golden Rice to combat vitamin A deficiency (VAD) in Africa and Asia.

This begs the question, what's so precise about GMOs, or more specifically Golden Rice?

No doubt the DNA construct to make the GM rice generate its golden colour was very precisely assembled in preparation for its insertion into rice cells.

The artificial DNA consists of a gene adapted from maize and a gene adapted from a bacterium whose products together act on material naturally present in rice grain to produce carotene (a pre-cursor for vitamin A). Added to these two genes are precise rice-grain 'promoters' (DNA 'on'-switches which make the genes work): these ensure that the artificial carotene is formed precisely in the rice grain and not anywhere else in the plant where it could cause havoc.

Also added to the GM mix is a gene for an enzyme (a bio-reactive protein) which has nothing to do with carotene formation, but can be used to precisely identify which cells have been successfully transformed into the golden version.

All this precise engineering is presumably what's meant by the 'precision' in precision agriculture, because from then on things seems to fall apart.

The two precise genes don't churn out carotene with the clockwork precision intended: the developers of Golden Rice are struggling to create a rice strain with enough carotene to have any possibility of affecting VAD.

The grain-specific promoter has turned out not to be so very grain-specific after all and causes havoc elsewhere in the plant probably due to the diversion of chlorophyll- and growth-regulator-synthesis into the (unnecessary) production of carotene.

Back in 2002, it took the creation of more than 1,000 gene transformation events to yield two, hopeful, Golden Rice strains which were taken forward for development.

The most promising GM event to emerge from this mass creation seems to have been under development for seven years before any one noticed it had an unexpected, unintended chunk of DNA missing. It's replacement, Golden Rice hopeful No.2, was developed for a further five years before it was recognised as a stunted no-hoper because the artificial genes had landed in a gene vital for growth regulation.

Note. We seem to have moved on to Golden Rice runner-up hopeful No.3 now [1].

By 2017, a single Golden Rice strain had been submitted to regulators in America, Canada, and Australia and New Zealand for an evaluation. The US administration had no interest in it because of the strain's lack of nutritional benefit [2]. Indeed, the carotene content of the GM rice notified to the FDA was both low and variable with a mean level paradoxically lower than that of the prototype way back in 2000.

Reported variability of the carotene content of Golden Rice may be due to technical factors. For example, 'carotene' refers to a collection of related substances only one of which (β-carotene) is a precursor for vitamin A: measurements of whole carotene content rather than β-carotene will inflate the suggested success. Different extraction methods and different processing of the rice prior to analysis will also affect the final suggested carotene content.

No matter how precise the artificial DNA is, rice is wind-pollinated, and the uncontrollable global contamination of rice with Golden Rice genes is fully anticipated [1].


All this sounds like a very hit-and-miss sort of 'precision'. But then, two-thirds of the nobel laureates who altruistically signed the letter supporting the notion of precision agriculture (GMOs) were specialists in subject areas unrelated to agri-biotech, namely medicine, physics, economics, peace and literature (the remainder had won their prize in the 'chemistry' section and may or may not have any relevant advanced knowledge).

The 'low and variable' levels of vitamin A precursor in Golden Rice may be an intrinsic feature of rice. This is because the lack of any mechanism for carotene sequestration (such as crystallisation or oil deposition) in the rice grain, plus the availability of the necessary carotene-precursor might be limiting factors. Both these points were noted in 2005 but dismissed as "of no immediate concern". However, they could be part of the reason for the variability of the carotene levels especially in different Golden Rice genetic backgrounds. They also might contribute to the rapid loss of carotene from Golden Rice in storage [2].

The reason why so much time, effort, scientific expertise and money has been spent on hopeless,
mutant Golden Rice strains seems to be that the developers were so convinced of the precision of what they were doing that they never checked the DNA for mutations before rushing ahead with the project. This is akin to building a house on quicksand because you haven't carried out a basic survey of the ground.

Could it be that only rice weakened by the artificial DNA insertion can be coerced by its novel genes into producing substantial quantities of carotene?

Tell our regulators to ditch their support for the high-tech, Golden Rice white elephant in favour of projects to make available the sustainable production of fresh greens in areas of VAD.