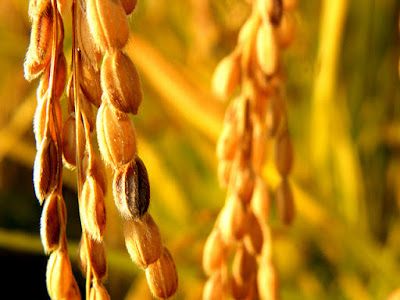 Forcing rice to produce GM carotene (vitamin A precursor), a substance with no role in the grains of the plant, has long posed safety questions.

The genes to generate carotene are put into 'Golden Rice' to create a bio-fortified staple food for areas in Africa and Asia where vitamin A deficiency ('VAD') is all too common.

Because of the unpredictable nature of GM plants, and because rice grains aren't adapted to manufacture or store carotene, and because vitamin A-related substances are highly biologically active (see Note), Golden Rice could contain novel harmful elements, especially to the young.

A study published in 2017 has highlighted other possible problems with Golden Rice.

Carotene and its derivatives aren't stable structures. Destruction can be directly fostered by cellular activities besides external, abiotic, factors such as temperature and light. In tests, 40% of Golden Rice carotene was lost over a three-week period, 87% over 10 weeks and after seven months only 9% remained. Add to this the fact that even the best efforts to produce a useful Golden Rice have failed to achieve average concentrations of carotene anywhere near those found in vegetables. This doesn't bode well for VAD sufferers eating little else but Golden Rice stored for several months in sub-optimal conditions.

Studies have also shown that high levels of some carotene breakdown-products can exacerbate the damage caused by exposure to geno-toxins such as cigarette smoke and asbestos leading to an increased incidence of cancer.


Golden Rice might prove a great saviour of sight and health. On the other hand, in real-life, it might achieve nothing whatsoever because it doesn't actually provide sufficient quantities of vitamin A. Or it might have novel elements which cause birth defects and cancers.

Safety testing of Golden Rice would be a grand idea. An even better one might be to fund a programme of access to a sustainable supply of fresh, vitamin A-rich greens in areas of high VAD.

(Note. Carotene is a precursor of two important biologically active compounds. One is 'retinal' which is vital to vision, and is the primary focus of the Golden Rice Project. The other is 'retinoic acid' which in involved in multiple regulatory pathways related to reproduction, embryo development, immunity, and metabolism.)