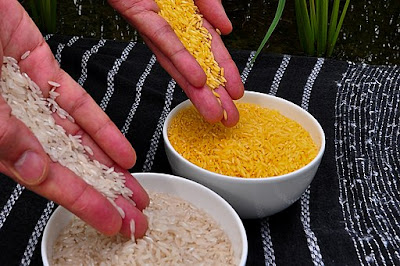 Project 'GM Golden Rice' was embarked on over 20 years ago to "reduce or eliminate much of the death and disease caused by vitamin A deficiency (VAD), which has the greatest impact on the poorest people in Africa and Southeast Asia".

Despite all these years of development, Golden Rice has still not been tested to see if it can alleviate VAD. Nowhere has it received the appropriate regulatory authorisation or institutional review board clearances, nor authorisation for unconfined environmental release. In short, GM vitamin A-enriched rice hasn't reached the starting line.

Since Golden Rice is clearly not intended for cultivation or consumption in any of these areas, why start by seek confirmation of its acceptability there?

The short and scary answer to this is in a brief letter from the FDA indicating that the Agency accepts the IRRI's safety and nutritional assessment and has no further questions. It further explains that the Institute has "informed the FDA that although GR2E (the only promising version of Golden rice to emerge from the project) is not currently intended for cultivation or marketing in the United States, it anticipates that GR2E rice, or human and animal food products derived from GR2E rice may enter the US food supply via imports from countries of production". In other words, global contamination of the rice supply is assumed to be inevitable, so the IRRI is covering its back by making sure the major developed areas of the world have agreed to getting contaminated before taking the Golden Rice project any further.

COMMENT After the global chaos caused by Bayer's experimental GM rice LLRICE601, this precautionary step is probably sensible, even if it's meaningless. 'Meaningless' because what the FDA letter boils down to is: the IRRI says its Golden Rice "is not materially different in composition, safety or other relevant parameters" from conventional rice except for the "β-carotene (pro-vitamin A) change" so we're not going to ask any questions. And the IRRI doesn't think the FDA needs to carry out a pre-market review or approval so we won't. And anyway it'll be the IRRI's fault if anything goes wrong.

The other even shorter answer to the curious opinion is: PR.

The FDA opinion enables the IRRI to announce it has received a "positive food safety evaluation" from the US. Since regulators in areas suffering VAD may not appreciate the short-comings (meaningless nature) of the US-style voluntary GM authorisation process (see Comment above), this claim can be used as a resounding endorsement.

Another point revealed in the FDA letter is that the Administration, in fact, has no interest in the safety of Golden Rice on technical grounds because the vitamin A content is too low for any claim of added nutrient value. If this seems contradictory to the raison d'être of Golden Rice in the first place, it's because the average American doesn't eat much rice. In areas of VAD, rice is the staple diet and the average person eats six times the rice consumed in the US. The 'positive food safety evaluation' seems to be based more on a perceived lack of relevance to the people the FDA is supposed to be protecting rather than on any science proving it safe.


Take any claimed GM food safety endorsements from US regulators with a big pinch of salt: they have no substance.