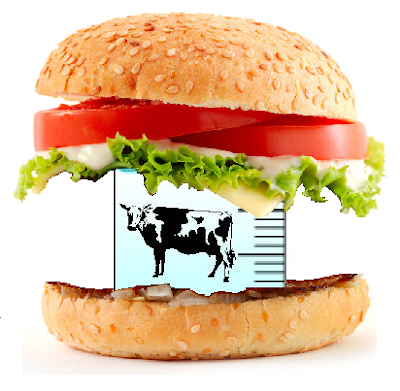 'Synbio', a.k.a. synthetic biology or synthia, began to look like becoming a reality in our food in 2014. Natural artificial additives such as stevia, vanilla and saffron look-alikes produced in vats of GM yeast were set to hit our plates [1].

One year on, 'Soylent' meal alternatives became the must-have for the modern man who doesn't have time to shop, cook or sit down to eat. Soylent is "proudly made with GMOs" and doesn't even pretend to have any natural ingredients [3].


The synbio offering for 2017 seems to be impossible, in both name and nature. Impossible Foods Inc have rolled out 'Impossible Burgers' made from cowless ground beef, "simple all-natural ingredients" processed beyond all recognition, plus a stack of complex unnatural additives which don't have to be added to a cow because natural versions are already there.

The key Impossible Ingredient is 'soy leghemoglobin' copied from a substance found in soya root nodules and produced in vats of GM yeast "similar to the method that's been used to make Belgian beer for nearly a thousand years".

Leghemoglobin has a 'heme' (haem) component which encloses an iron atom and acts as an oxygen carrier and delivery system. The 'heme' is the same as that found in blood cell haemoglobin and muscular myoblobin where it serves much the same purpose in oxygen supply, although not by the same process. The 'globin' component is a large protein which can vary in size, chemical structure and essential 3-dimensional shape to govern the gas carrying process of the heme. Mammalian globins are assembled into more complex structures than plant globins.

Soy leghemoglobin is added to Impossible Burgers to make the textured wheat and potato protein plus coconut oil, which are the principle ingredients, look and taste like cow and to make them bleed red stuff when you bite into them.

Impossible Foods claims to be "fully compliant with all U.S. Food and Drug Administration (FDA) regulations". This is probably true because the FDA only reviews food ingredients, it doesn't actually regulate them and doesn't even review GM micro-organisms. Impossible Foods has been careful to include the GM leghemoglobin as "one more special ingredient", not as an additive: this is important because the FDA does regulate additives.

Impossible Burgers were put on the market because Impossible Foods was able, perfectly legally, to self-affirm its product as 'Generally Recognised as Safe' (GRAS) using its own evidence from its own expert review panel of food safety scientists. It hasn't escaped foodie writers that these experts all have historical or on-going links to Monsanto, biotech industry funding, the Gates Foundation, and Philip Morris tobacco.

It would, however, be useful for Impossible Foods' marketing strategies if the FDA would confirm its GM soy leghemoglobin safe to eat.

What the FDA actually says about the substance is that it "believes the arguments presented (by Impossible Foods) individually and collectively, do not establish the safety of soy leghemoglobin for consumption, nor do they point to a general recognition of safety".

The Agency has expressed concern that soy leghemoglobin has never, in fact, been consumed by humans. Fully 27% of the protein extracted from the GM yeast isn't leghemoglobin but consists of 46 other, unknown proteins with unknown soya-based, yeast-based, or novel toxic potential. Since soya is commonly allergenic and many people have negative reactions to yeast, the possibility of allergens in Impossible Burgers isn't impossible.

On Impossible Foods' website, heme is described as "a basic building block of life on Earth" making it sound safe, solid and dependable. However, heme in isolation (without the globin) is toxic to cells due to its ability to damage protein structure, create toxic fat derivatives and damage DNA. When heme is bound by its protein, its reactivity is harnessed to facilitate species-specific cellular processes needing oxygen. Heme-proteins aren't building blocks, they provide fuel and make things happen: if things happen wrongly because the heme isn't comfortable in its GM protein or the novel protein isn't comfortable in its living surroundings, disease could well result.

Impossible Foods is a Silicon Valley start-up which has raised $257 million in venture capital funding from Bill Gates and others. Treating food as an app which can be rushed to market is a Silicon Valley mind-set which sees safety as a simple obstacle to be circumvented not as a necessary prerequisite to marketing.

If you're wondering how Impossible Foods is succeeding in marketing bleeding veggie-burgers to vegetarians, vegans and real-beef lovers, it's products are touted as saving the planet from greenhouse gases, water depletion, and land shortage. Also the burgers aren't going on sale directly to the public. Impossible Foods has enlisted the help of 43 trusted restaurants nationwide, including several burger chains, which are now serving Impossible Burgers to unwitting customers and willingly supplying all the free PR persuasion needed.

Next in the pipeline is Impossible Chicken, Impossible Pork, Impossible Fish, and Impossible Yoghurt, but presumably none of these will be designed to bleed when you bite into them and won't be tested for safety any more than the Impossible Burgers were.


A study by the Pew Charitable Trusts in 2013 found that the FDA was unaware of roughly 1 in 10 of the 10,000 ingredients used in food because companies have used the self-affirmation process for GRAS status. This process was introduced to cover ingredients that had long been used in the food supply to avoid companies having to make the same application for approval every time they made a new product. It's now being used to market GM versions of a huge number of substances and bypass the FDA.

It's not too clear why Belgian beer-brewers of yore who used yeast to produce a potable alcoholic drink should be getting the blame for American entrepreneurs who are using a completely different and novel species of yeast which has been genetically transformed to produce a large artificial protein with heme.

What is clear is that US food regulation is so fragmented it gives all the appearance of free-wheeling blindfolded to a humanitarian disaster.