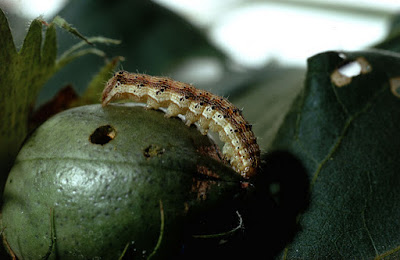 GM crops which generate their own 'Bt' insecticides to kill their own pests are a key area of business expansion for the biotech industry. The biggest threat to these lucrative products is the emergence of Bt resistant pests.

Current wisdom in today's computer-dependent, gene-centric scientific world peopled with DNA-engineers, sees Bt resistant pests emerging due to a mistake in their DNA which accidentally produces a gene which accidentally interferes with the toxic effects of Bt and which they can pass on their offspring.

Based on the notion that pests would need two such 'resistance' genes to cope with Bt, the chance of it happening the field has been presumed slim, and the problem assumed to be a long-term one. Accordingly, biotech wise-guys, regulators and computer modelling came up with an anti-resistance strategy in which farmers plant non-GM 'refuge' crops beside the Bt ones to dilute out any chance mutant pests and their nuisance genes. As GM crops arriving on the market now come stacked with increasing varieties of Bt genes, the size of the 'refuge' crops has been allowed to dwindle.

And, is the wisdom working as it should?

By 2013, five out of thirteen pests examined had 'field-evolved' resistance. This wasn't supposed to happen.

The problem is that in the field, the underlying genetics responsible for resistance are complex, difficult to identify, and only known for a very few pest populations. Also, biological systems don't follow biotech or computer generated rules.

In the real-world, even lowly insect pests can have the intelligence to beat the Bt in their food. In the real-world, genes can change their expression and interact with each other and with the environment as part of a totally fluid existence: the name of the real game isn't legoland or snakes-and-ladders, its environmental-, genetic- and cognitive-mediated plasticity of pest physiology and behaviour.

This has been highlighted by science which found that insects can regulate their feeding to reduce their exposure to Bt toxin and to optimise their nutrient intake. Better nutrition, of course, can help any animal deal with toxins.

Noting that cotton bollworm (a major moth caterpillar pest) will select a much higher protein diet when foraging for itself in the field than is forced on them in a laboratory diet during experiments, American researchers checked out what effect these diets had on the insects' resistance to 'Cry1Ac', a widely deployed Bt toxin in GM crops). They found that the bollworms fed their favoured self-selected diet had considerably increased resistance (as much a 100-fold) to Bt.

This has several practical implications for pest control strategy. For example, caterpillars with increased resistance have delayed development after feeding on Bt crops: this means they feed longer and cause more crop damage. Also, there's no 'resistance gene', nor pairs of 'resistance genes' which could be diluted out by a refuge crops.

Biotech scientists set out to create smart GM plants to kill bollworms without informing themselves of the pests' basic biology: their laboratory tests have been wrongly designed, the basis for the problem under investigation (Bt resistance) has been wrongly ascribed (to chance genetic mutation), and their anti-resistance strategy (refuge crops) are inappropriate.


Susceptibility to Bt toxins in the field may be significantly over-estimated while the potential for resistance has been hugely under-estimated.

Stacking different varieties of Bt into a crop may not, in reality, improve the situation very much. Bt toxins are proteins produced in large quantities by GM plants. Stacking Bt genes may make things worse by increasing the protein content of what the pests are eating, and making them healthier. Impaired susceptibility to a toxin will also give increased opportunities for the emergence of the genetic adaptations which the biotech industry and regulators have been so fixated on avoiding.

That's just the level of our ignorance of one pest, of one crop, and one Bt toxin. Bear this in mind when regulators, industry and scientists try to tell you they have GM answers to agricultural problems.