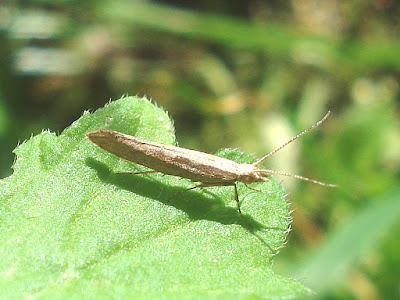 It's clear from the speed with which Bt-insecticide resistant pests are emerging that the hoped-for delaying tactic of telling farmers to plant non-Bt 'refuges' besides their Bt-generating GM crops to harbour wild-type susceptible pests just isn't working.

Biotech industry attempts to make its Bt crops easier for farmers to use by selling refuge-in-a-bag (RIB) GM seeds mixed with 5% non-GM seeds seems to have made the situation worse by diluting the level of insecticide present in the field [1].

As a model RIP, scientists have created Frankenmoths with the dual purpose of eliminating a key pest and at the same time funneling Bt-susceptible moths into the crop to do the job refuges were supposed to do but failed. The female Frankenmoths have an artificial gene which keeps them alive in the laboratory for breeding providing they're supplied with tetracycline (antibiotic). Once they're in the field where there's no tetracycline to keep them alive, they die. Male Frankenmoths have an artificial gene for producing Frankenmoth offspring. Their job is to mate with wild-type female moths whose offspring will then be Frankenmoths. The next generation will die at the caterpillar stage if they are females or carry on mating with wild-type females if they're males. The result is a mass extermination of female caterpillars and the whole moth population.

Tests using Diamondback moths which are partial to broccoli, found that their population began to reduce two generations (about six weeks) after the release of the GM moths and collapsed completely after three generations (about nine weeks).

It was also found that the desired extinction only happened when Frankenmoth releases were overwhelming (up to 40:1 GM:non-GM), which is where the Bt comes in.

Bt insecticide doesn't work well on its own because the pests quickly develop resistance.

Scientists found that a combination of Bt crop plus releases of Frankenmoths was pretty good at annihilating the pest. By using GM moths which are susceptible to Bt, they acted as a presence of 'wild-type' pests which should have been preserved by the refuges. The dual-pronged tactic will prevent, or even possibly reverse, the emergence of resistance.

In this way, the biotech industry's Bt crops will get a new lease of life, the Frankenmoths' creators (Oxitec/Intrexon [2]) will have another magic GM insect cure to put on the market, farmers will have pest-free crops without the expense and work of planting refuges, and the consumers will have lots of yummy broccoli.

On the crest of all these high hopes, Cornell University is proposing multiple trial releases of up to 30,000 male GM moths a week over a 2 year period in New York State Agricultural Station. The crops involved in the experiment are to be burned, not sold for consumption.


Science shows that in contained conditions in the laboratory, this technique takes three generations or nine weeks to obliterate the pest; in the field where influxes of fresh pests are inevitable, it could take much longer. Until the adult pests have gone, their offspring will be munching on the crop, even if the doomed GM females don't munch for very long.

In nine weeks, an infested crop will be reduced to leafless stumps. This doesn't seem such a good deal for the farmer.

Experience shows that, if you create a gap in an ecosystem by removing a pest, another pest comes along and fills it. Pest No.2 will need to be sprayed with insecticides. This doesn't seem such a good deal for farmers either.

While the moth numbers are decreasing, all that yummy broccoli will have GM caterpillars on it.

Nobody's mentioning how leaky this technology might be with regard to female Frankenmoth survival when they should be dying, or to Bt-resistance in moths which should be susceptible.

Since open field trials obviously don't have any limits, who knows where all these GM moths will end up.

The most worrying aspect of all this clever GM technology is that after years of trying to sell its Franken-insect solutions, not a single product has achieved anything. Intrexon reported an operating loss of $35.25 million in the last quarter, and a yearly loss of $125 million in 2016. Yet, the investors seem to keep coming.

The biggest question you can put out there is why are scientific and financial resources being wasted on this scale?
Background