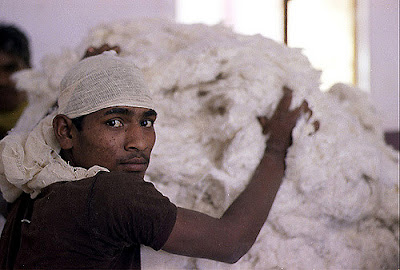 "The mantra is to let 'the market' intervene: a euphemism for letting powerful corporations take control; the same corporations that benefit from massive taxpayer subsidies, manipulate markets, write trade agreements and institute a regime of intellectual property rights thereby indicating that the 'free' market only exists in the warped delusions of those who churn out clichés about letting the market decide" (Tod Hunter)

The first lesson is the level of control corporate interests can exert if the regulatory body for novel crops lacks capability to regulate them.

Bt cotton is the only GM crop grown in India.  While field trials started in 1997, the first GM crop, 'BollGard I', which generates a single Bt insecticide was rushed prematurely into commercial use in 2002 in response to the discovery of thousands of hectares of illegal GM cotton cultivation.  This first crop was followed four years later by 'Bollgard II' which has two Bt toxins.

The Coalition for a GM-Free India [1] maintains that the widespread planting of the illegal GM crops was a deliberate act, to present GM cotton to Indian regulators as a faît accompli.

Next generation GM cotton, 'Bollgard II Roundup Ready Flex', which is more of the same Bt toxins but with added herbicide tolerance and added opportunity for supplier profit, seems to have set out on the same irregular path as its predecessors.  Indeed, the Coalition notes "... a large area of herbicidal-tolerant Bt cotton being grown illegally by farmers, with the regulators and governments just twiddling their thumbs on the matter ...".  With Monsanto's application for approval of Bollgard II RR Flex sitting before the Indian regulators, the scene seemed primed for a repeat performance.

However, the ploy may have been in vain , because the Indian Government is learning the second lesson: GM cotton, with its built-in profit for corporations, is expensive.  Powerful seed industry lobbying kept State government meddling at bay and GM seed prices high until 2015 when the central Indian Government finally managed to regulate the prices.  Two years on, things have moved a stage further and the Government has imposed price and royalty cuts on GM seed.  Monsanto, seeing its easy profits evaporating, withdrew the application to market BollGard II Roundup Ready Flex and is reducing its research activities and investment in India.

Added to all this is an increasing awareness in India that the very expensive GM 'insecticidal' seed isn't controlling insects very well.

At the same time, non-GM cotton is making a comeback, especially 'desi' species.  These native cotton species have been grown in India for more than 5,000 years.  They are adapted to local growing conditions, need little agrochemicals, are tolerant to moisture stress, water logging and salinity, and are resistant to most diseases and insect pests.  Also, they come free of royalties and corporate control.


Sadly, the third lesson will be that once it's in the fields, you can't just turn your back on GM and walk away: it will still be there to haunt you and the alternative may be hard to come by.  Conventional cotton seed is in short supply, may have been poorly stored, and 'non-Bt' seed is now contaminated with Bt genes.  The shift back to sustainable cotton farming in India will be a "long, arduous and uphill journey".