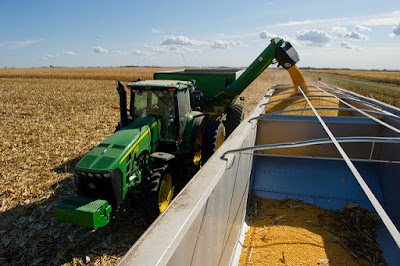 The Green Revolution has been an exercise in creating extremes. We now have extreme uniformity in our staple crops and in our agricultural practices, with an extreme dependence on agrichemicals, and a globalised crop market (you can't get much bigger than that).

This has led to an extreme reduction in our crop gene pool, unstoppable pest problems, and a problem-solving mind-set limited to more-of-the-same single high-tech solutions to 'key' difficulties.

We now have food from crops which have been intensively bred for extreme yield with scant attention to whole nutritional value, taste or pest resistance.

Attempts at biological controls applied on a large scale as if they were chemicals have highlighted our limitations: ladybirds released to kill aphids flew away (these insects are migratory, plus they don't stick around unless there's food for them); nematode worms released to kill western corn rootworm in America ate something else instead.

One of our biggest Green Revolution success stories is maize. This has been bred for maximum yield dependent on artificial fertilizers, chemical pest control and minimal crop rotation. Maize is grown to fatten livestock which don't live very long: their food only needs to make them bigger, not healthier. When chemicals stopped controlling maize pests, the solution was to create GM crops which manufactured their own, internal, 'Bt' insecticide.

Natural plants are not simply victims of herbivores [1]. They have evolved an arsenal of physical and chemical defences in response to attack. What's happened to our Green Revolution maize that it can't defend itself anymore?

One reason has been drawn to agronomists' attention in recent years.

Maize ancestors know how to summon help from their attackers' enemies. By releasing volatile chemical signals into the soil from their roots, old-fashioned maize can recruit nematode worms to come and eat up western corn rootworm. Studies of modern American maize found that 22 out of 24 common strains had lost the ability to generate the volatile signal needed.

Interestingly, the gene which should function to produce this volatile substance hasn't been lost or mutated, but the DNA-regulatory system which should switch it to 'on' has become compromised. The problem is peculiar to America: it hasn't arisen in European-bred maize strains.

"WCR (western corn rootworm) is exceedingly difficult to control, and pesticide applications are relatively expensive, environmentally unfriendly, and not always effective" (Degenhardt). In the absence of crop rotation, this pest is spreading rapidly. Restoring native resistance to the rootworm is clearly possible through classical breeding. However, GM correction of the problem caused by humans in the first place is considered favourable because it would be faster, and would minimise changes of existing desirable traits in the maize (and would, of course, be patentable and therefore more lucrative).


If we accept biotech industry propaganda, obediently repeated by regulators and the press, stating that a reduction in the yield lost to pests somehow becomes a yield increase, it follows that America has actively bred low-yield into its maize.

What's most disturbing about this revelation that compromised pest-defences now come as standard in US maize, is the indication it gives of how dangerously narrow the gene pool has become for a crop on which so much depends.

It's also disturbing to read that plant volatile chemicals, one of which is proposed as a GM target are actually "often complex mixtures" of a "high number of compounds", "making it difficult to demonstrate the role of specific compounds". And that they are thought to "serve a variety of physiological and ecological functions" of which "indirect defence" is only one. And that production of volatile chemicals is dependent on a "complex" "regulatory network". And that the exact functions of the plants' presumed defensive metabolites are "largely unknown". And that the volatile chemicals, or at least one of them, also has anti-microbial activity with obvious ecological implications to the soil and to plant health. And that the recruited enemies of the pests may have to learn to respond to the signal. And that the "breadth and sophistication of indirect plant defences" is only just coming to light. And this is what genetic engineers are planning to manipulate using isolated artificial genes to generate a missing substance.

Nematode worms, as a class, can be parasitic on plants and animals, and as bacterial feeders have a potential to affect the health of the soil. A GM crop attracting or teaching the wrong kind of nematode could be quite catastrophic.

Artificial gene tinkering involving something as obviously complex and little-understood as plant volatile defences in a living system already artificially compromised is a recipe for crippling long-term side-effects.

The fundamental problems of out-of-control maize pests have been identified as:
All of these can be sustainably and best corrected without adding on a layer of GM problems.