All maize is wormy now 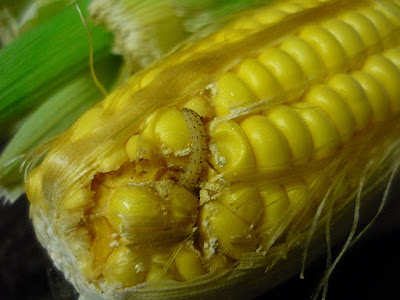 If you've been following the GM issue for a while, cast your mind back to 2006. A long-standing, respected British science journal gave its "Outstanding Paper Award for Excellence" to a study which could be better described as a pro-GM PR initiative dressed up as science.

To assess what influenced consumer purchasing decisions, the study offered 'Bt' insecticide-generating GM sweet corn for sale in a Canadian farm shop beside conventional sweet corn. One of the more blatant exercises in propaganda used during this 'study' was the descriptors attached to the two types of sweet corn: the conventional one was labelled 'wormy' followed by a list of the pesticides sprayed on it; the GM one was labelled 'quality' with the 'Bt' (insecticide!) part kept separate.

Fast forward ten years and check out how these two sweet corns would truthfully be labelled today. The wormy one is still wormy and still sprayed with multiple pesticides. And the quality one?

According to a 21-year study of insect resistance in America using Bt sweet corn as a model, the 'quality' kernels are now unexpectedly every bit as wormy as the wormy ones (more than 80% of ears in both cases), and are getting sprayed with pesticides too. In fact, many sweet corn farmers in the area studied have stopped growing the Bt version.

Interestingly, the pest resistance study pointed out a lot of factors which the biotech scientists' predictive models didn't take into account.

Their models recommend planting 'refuges' of conventional crops near the Bt ones to preserve a breeding stock of susceptible pests which will dilute out any emerging Bt-resistant pests. 'Refuges' are, therefore, mandatory for field corn. Sweet corn, which accounts for less than 1% of planting, doesn't require a refuge and was used for monitoring pests because it is unconfounded by the expected refuge effects.

However, refuges are extra work and expense for the farmer and compliance has been only 78% at a time when Bt crops account for as much as 93% of planted maize. That's a large area of missing refuge.

Add to this, the pressure on pests to evolve resistance is upped by the use of the same or similar Bt toxins in other non-maize crops all over the country.

Also, the vast areas of field corn are harvested at a much later stage than sweet corn. This means they sit in the ground for a much longer time with declining Bt levels which pests are more likely to survive, and more likely to develop resistance to.

All of these "probably contributed significantly" to pest evolution. And, let's face it, they could have been foreseen.

More difficult to factor into a model are the effects of propaganda, climate, weather, and pest lifestyle.

The ability of the biotech industry to promote its Bt crops as being so good at killing pests that refuges could be minimised certainly convinced the regulators.

Surviving pests will move with the winds and their food supply. As the maturing Bt crops in one area become less attractive to the pests, later-planted crops elsewhere will recruit resistant individuals (hitching a ride on the wind).

Climate conditions in some Bt crop growing areas are favourable to over-wintering of (resistant) pests, all ready to infest the next Bt crop.

Complex interactions between pests and toxins have an unexpected role in resistance. Bt doesn't always kill outright: it may instead slow development to adulthood. When this happens, damage to the crop from caterpillars increases even when the numbers of adult pests emerging is going down. Also, the delayed resistant adults can emerge at a different time from those in the refuge so the vital mating with susceptible pests doesn't happen. Pests which limit their own numbers by cannibalising competitors of similar size to themselves have been found to leave smaller, Bt-suppressed (resistant) kernel-mates alone.

While resistance management is reckoned to have delayed the emergence of one key pest, it seems to have promoted resistance in other, previously lesser but more Bt-tolerant pests.

So far, the more recently-introduced multi-insecticidal GM crops have been successful, but it's unknown whether this will prove sustainable, especially if (or when) gene pollution spreads low, resistance-stimulating, levels of cross-reacting toxins through crops.

In conclusion, the authors of the pest-resistance study list the inescapable implications of their findings. They don't suggest any solutions, but it's clear that more-of-the-same is unsustainable.

More GM pesticides, more regulation, more complex and expensive crops management, more patents on food, and more intensification aren't going to take us anywhere. It's time to control pests by diversifying our agricultural practices, our suppliers, our crops, and our livestock ... in other words, our food chain.

In your own micro-world, you can start by eating local.