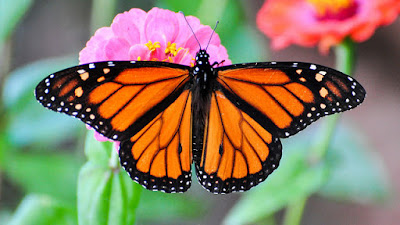 In 1995, the population of America's iconic and wonderfully colourful Monarch butterflies reached an all-time high. The following year, GM crops hit US fields with monocultures of GM 'Roundup Ready' plants doused with glyphosate herbicide and monocultures of GM insecticidal plants. These commodities mushroomed within a few years to cover a great deal of the 400 million or so acres of America's cropland.

Apart from the brief rally in the 2010-2011 season, Monarch numbers have declined steadily ever since that peak. Even optimistic estimates put the total loss at more than 80%, and the most recent tally recorded a further drop of 27% from last year's count.

A study by the US Geological Survey has concluded that there is a substantial probability that Monarch butterflies east of the Rockies could decline to such low levels that they face extinction. Researchers estimate the probability that the Monarch migration could collapse within the next 20 years is between 11 and 57 per cent.

Due to their spectacular, but precarious, migratory life-style [1,2], Monarchs need a very large population size to preserve their resilience to environmental threats. To put this in perspective, a single winter storm in 2002 killed an estimated 500 million Monarchs, several times the size of the whole current population.

Besides the weather, disease and predation thrown at them by Nature, Monarchs have to survive what is being thrown at them by people. Logging encroaching on their Mexican over-wintering haven is squeezing the butterflies out. The 'clean' US fields of GM herbicide-tolerant, soya and other commodity crops no longer have milkweed, sole food for the Monarch caterpillars, growing in and around them. With farmland no longer doubling as a habitat for the butterflies, there's an invisible, foodless barrier to their migration.

Where the milkweed still grows, it may be dusted with 'Bt' insecticide-filled pollen from nearby GM insect-resistant crops. We know what Bt pollen in large quantities does to Monarchs: it kills them. Biotech industry claims that real-life levels of Bt pollen are too low to be fatal are probably true, but caterpillars fed small doses of a potentially fatal pesticide might well be too sickly to grow into healthy, reproducing, migrating butterflies.

Attempts to address the situation include a White House pledge to establish or improve seven million acres of Monarch habitat and grants from various wildlife-promoting bodies with matching funds promised by the biotech industry amounting to over $10 million in "total on-the-ground impact". That's a whole lot of milkweed.

Environmental groups remain sceptical. The milkweed stands will take time to establish and mature. Seven million acres amounts to less than 2 per cent of America's crop land. Monarch decline may pass the point of no return before the scramble to plant food for them has delivered.


There's something satisfyingly ironic about the US administration and biotech industry planting weeds when they've been trying to kill every green thing that doesn't generate cash for decades.

People will miss the Monarchs because they're so pretty. Nature will miss the Monarchs because they have an ecological niche which spans the continent. The bigger concern is that the Monarchs are not alone in being starved and poisoned out of existence by GM crops. How many less physically attractive wildlife species no one's paying attention to are vanishing or already gone? How many wildlife species have to vanish before whole ecosystems become extinct?

Let's not find out the hard way! Demand a shift to pesticide-free agriculture, including insecticide-producing GM crops.
Background