Kids have a right to know too 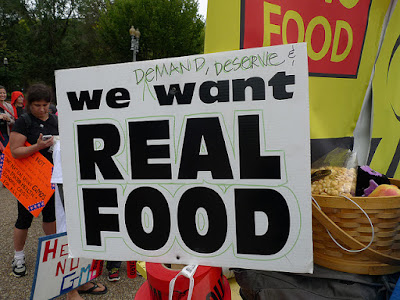 "... to be maximally healthy" Michael Pollan advises "Eat food, not too much. Mostly plants."

The second and third recommendations can easily be achieved with a gradual adjustment of lifestyle. But finding food, not a "food-like substance" but real food, not just a brand-name but the stuff you can tell what it is you're eating without being told can be challenging.

Consumers in America are, however, rising to this challenge.

Iconic brand names and 'food' packaged to last forever are out [1], "clean label" produce are in, and sales of non-GMO certified foods have tripled since 2013 to $15 billion in the year to September 2015.

Poll after poll has shown that an overwhelming majority of the public want GM food to be labelled. And that includes kids.

One "clearly very articulate, clearly intelligent" teenager (now 16 years old) in Canada has been running a website for the last two years on 'Kids Right to Know'. Its message is a demand for GM food labelling, and it has a growing social media following.

Attention was drawn to this young activist's success by 'US Right to Know' who used Freedom of Information requests to investigate collusion between Big Food, Big Biotech, their front groups and academics to deliver pro-GM propaganda (see below).

It seems the biotech industry felt so threatened by Kids Right to Know that it requested one of its GM-friendly US science professors to deal with the teenager. The result was a U-Tube video, described by the young activist as "almost degrading". It suggested her problem is when she "starts to let non-scientific thinking kind of cloud her final decision-making process".

Why would the mighty US biotech and food industry be so scared of one 14-year-old? And one with a cloudy mind and non-scientific thinking to boot?

PepsiCo revitalised the flagging market for its neon-hued sports drinks by redirecting its marketing from the 18-49 year-old macho males it thought were going to buy its wares to kids. It's the high-school kids who are the obsessive athletes and marathoners: this is the population most devoted to their physical health, and comprises a very food-conscious bunch.

The second half of the answer is that, scarily for the food-like substance industry, other teenagers are listening to their peer, understanding her, believing her, and seeing right through the hype. This wouldn't matter too much if these teenagers were going to grow into adults like their parents. But they won't. These aware youngsters are the 'millennials': they are the big earning and big spending generation of the future.

It's satisfying to note that, David and Goliath-style, the anti-kids-right-to-know video seems to have backfired. It has made the creator of Kids Right to Know the 'face' for the GMO labelling battle in Canada; it has drawn attention to the website, drawn attention to the extremes to which Big Food and Big Biotech will go to prop up their pro-GM agenda, and it has exposed the willingness of top scientists to prostitute their credibility.

While the professor who offered to deal with a 14-year old is curtailing his pro-GM activities and trying to justify his collusion with industry using "a new standard of transparency" and "a new tool to cultivate trust", that pesky teenager is playing him at his own game: forget the science, kids "are still going strong with our message of right to know ... we're just appealing to simple transparency".

January 2016 started with a surprise announcement from Campbell Soup Co which might prove a turning point in GM labelling in the US, and might just get Kids Right to Know what it wants.

After years of supporting all industry moves to prevent GM labelling, supporting loophole-laden 'voluntary' GM labelling, and opposing all State attempts to legislate for GM labelling, Campbell is setting "a new bar for transparency". The Company "is withdrawing from all efforts led by groups opposing mandatory GMO labeling legislation, including those led by the GMA (Grocery Manufacturers Association)" Campbell will now put its weight behind Federal mandatory GM labelling. And, to prove it's serious, it will specify GM ingredients on its labels.

US Professor of Nutrition, Marion Nestle, can have the last word:

"You don't have to be a scientist to know how to eat ... just pick up fruits, vegetables and meat, and stay our of the processed foods".


GM foods may be struggling for acceptance (everywhere) at the moment, but the biotech industry still thinks it can win acceptance in the long-term, presumably once it gets rid of the old dears who are too set in their ways to embrace 'science'.


On this side of the pond, we've got GM food and feed labelling, but what the fish, hens, cows and pigs which form a large part of our diet are being fed is hush-hush. If Campbell's vision of the future and long marketing experience win out, America will find itself in the same semi-GM-labelled boat.


Does anyone know an intelligent, articulate, blog-happy teenager who'd like to kick off a UK or EU Kids Right to Know social media network?


It could start by explaining that the problem is when Big Food and Big Biotech start to let profit kind of cloud their final scientific process.

The US Right to Know (USRTK) investigation
USRTK, funded almost entirely by the Organic Consumers Association, filed Freedom of Information requests to investigate 43 public (tax-payer-funded) university faculties and staff.
It revealed that GM-friendly academics chosen for their influence were asked to pen short policy briefs on key GM topics.

The process of producing and merchandising these respectable policy briefs was kept at arm's length from the industry by using a respectable-sounding but industry-funded front group, The American Council on Science and Health, and a PR company.