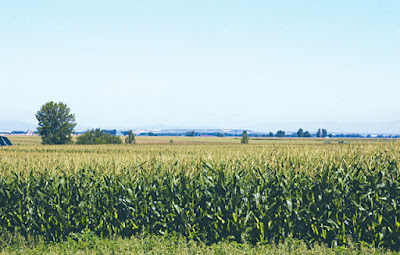 There's only one kind of GM maize being grown in Europe, and it isn't doing too well.

Spain is the only EU country to embrace 'MON 810', a 'Bt' insecticidal, GM maize: one third of the country's total maize production is GM. In Aragon, Spain's major maize-growing region, 76 percent is MON 810.

A report has been prepared by the Government of Aragon comparing GM with conventional maize, including non-GM parent strains where available. Its conclusion was that there were no significant differences in yield between the two, and that no significant damage from 'corn borer' (which the Bt crop is designed to kill) has occurred in the past five years.

MON 810 has proved a floundering flagship for GM in Europe and an expensive seed to solve a non-existent problem.


There's a huge area of GM soya in Brazil, and it isn't doing too well either.

A university study of soya across ten Brazilian States compared performance of conventional soya with the original single-trait GM Roundup Ready (RR) soya, and the recently introduced "Intacta RR2 PRO" GM soya which is tolerant to Roundup herbicide and produces a 'Bt' insecticide.

It concluded that yields of second generation GM soya were only a little higher than the first generation. Conventional soya outperformed both. The cost of pesticides was much lower for Intacta RR2 PRO crops, but this is probably because it's a new crop the pests aren't used to yet, and the advantage is unlikely to be sustained. Costs for second generation GM soya seed include royalties and are almost double that of conventional soya.

Ironically, despite non-GM soya being much more profitable than Intacta RR2 and nearly three times more profitable than the old RR soya, Monsanto has squeezed the most profitable soya out of the market by enforcing a rule that only 15 percent of seed sold can be conventional. Even more ironic under these circumstances is Monsanto's counter-propaganda to the University findings: "Rapid growth in the adoption of Intacta RR2 PRO technology shows that farmers are receiving the benefits of the technology in the field" (our emphasis).

RR soya appears to be a manufactured success, and RR soya with an added-value insecticide thrown in isn't much better.

Cotton production there has declined continuously ever since, and this year is reported to be the lowest since 1998-99 (Pakistan Agricultural Research Council). Pakistan is the world's fourth-ranked cotton producer, but its cotton imports this year are expected to be the second highest ever.

You don't have to look far to find the reason: the GM seed, imported from China, is ill-suited for growing in Pakistan, plus the royalties, fertilizer and pesticide costs make the crop expensive to grow, and prices fetched are low. These crops need agri-chemical inputs for optimum management which the farmers are reluctant to invest in when prices for cotton are so weak. Erstwhile cotton farmers are switching to other crops, such as sugar cane.

One former Pakistan agriculture official pointed out that the biggest threat to their cotton is a viral pest, Cotton Leaf Virus: Bt insecticide-generating crops have little relevance.

Hmm. Another expensive ill-selected GM solution to a non-existent problem.


India also took the plunge into 'Bt' GM cotton production a decade ago after years of devastating losses due to American bollworm which had become resistant to pesticides. Areas planted in key cotton-growing States are now overwhelmingly Bt.

One Indian farmers' representative said "there was a big propaganda that (Bt cotton) was pest-resistant".

That "big propaganda" is now being shown up for what it always was. In 2015 major cotton-growing areas have reported "massive" yield reductions: up to 40 percent due to whitefly (a sap-sucking pest), nearly half due to earworm (a moth caterpillar), around 40-50 percent due to pink bollworm (moth caterpillars which feed off the seeds inside the cotton bolls and prevent the development of the cotton fibre around them).

Whitefly is found on the back side of leaves and can only be controlled by heavy spraying of pesticides; the build-up of the infestation was so sudden it caught farmers unaware. Where earworm has unexpectedly emerged, farmers leaders are demanding compensation from the State Government, and are questioning the quality of the Bt seed they were sold. Pink bollworm was a "negligible" pest to cotton before the advent of Bt crops.

It seems Bt pest-resistant crops create pests, wipe out yields, profits and livelihoods, increase spraying of pesticides, and are sold to farmers without any credentials as to their quality.

Whatever the way forward for agriculture, it doesn't lie in quick-fix genetic meddling. Perhaps this is a more accurate definition of 'GM' than the one we've been using.

With any luck Spain is re-thinking its maize-growing strategies. Let's not allow the rest of Europe to be drawn into the same GM crop trap.