Could Bt crops wipe out biodiversity? 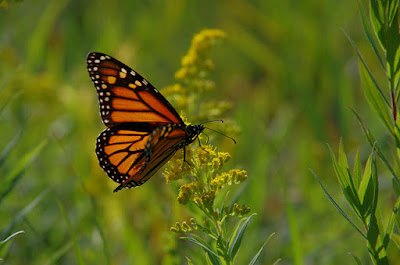 The major target of "Bt" insecticidal proteins in GM crops is moth caterpillars, different species of which feed voraciously on the stems, leaves, roots, or developing seed parts, of important commodity crops.

Although most insect pest attacks are localised to specific parts of the plant, Bt plants are genetically transformed to produce the insecticidal protein throughout their tissues including the seeds and pollen.

Target pests are very quickly killed by selected Bt toxins. Effects on non-target insects, especially close relatives, such as other moths and butterflies, are unknown [3]. Early concerns were raised in the US that the iconic Monarch butterfly, with its huge multi-generational migrations through areas of Bt-monocultures, plus its dependence on the milkweed growing near such fields for its sole food, risked annihilation from Bt pollen contaminating the milkweed leaves [1].

This potential problem was immediately down-played, and has since been eclipsed by the realisation that glyphosate herbicide, used very widely on GM monocultures, has caused so much collateral damage to the milkweed population that there's little left for the Bt pollen to land on. It seems the Monarchs are being starved out of existence before they have a chance to be poisoned [2].

But what about all the other species of moths, butterflies and other insects which might suffer long-term harm from exposure to Bt?

In one agricultural area in Switzerland, 56 different species of butterfly alone have been recorded. Of these, 90% of the caterpillars are feeding on leaves at a time which overlaps with maize flowering when pollen is shed. As few as three Bt-containing pollen grains per square centimetre of leaf have been found to cause adverse effects on moth/butterfly species.

EU regulators have deferred to industry claims that the microgram amounts of Bt toxin in their GM crops are too low to require any more than the most basic safety testing. This claim hasn't been verified. Non-target animals such as soil-dwellers feeding off dried GM plant debris could ingest Bt toxin at six times the concentration present in the fresh, growing plant. The trend towards GM plants which generate multiple Bt toxins aimed at a range of pest-types means any consumer is exposed to a total toxic protein load fifty-fold greater than the single Bt types which have actually received testing.


OUR COMMENT
Within the biological dessert of a GM monoculture, all these collateral toxic effects from Bt may not signify. However, most of the world's farms are part of a patch-work with nature: their impact on surrounding areas is potentially devastating. GM crops with their permanent toxic load have no place in Europe, nor in any areas of traditional farming. Don't let the biotech industry pull the wool over regulators' eyes: the wider effects of Bt crops on biodiversity must be tested comprehensively.