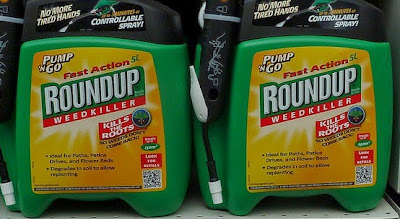 What do Barcelona and Edinburgh have in common?
They are two of the most picturesque cities, they both have stunning architecture and an awful lot of tourists, and both can boast lots of green spaces. Also, they each have City Councillors on the ball enough to notice that they are treating their green spaces with a probable carcinogen, to which their citizens and tourists will probably be exposed. Therefore, they've both come to conclusion that it's probably a good idea to ban the offending substance.

Each year, Edinburgh City Council has been routinely spraying some 4,700 litres of glyphosate-based weedkiller on its parks and other public spaces. With the World Health Organisation announcement that its expert review of the science has concluded glyphosate is a probable carcinogen [1], Edinburgh has commissioned a report on the options and costs of alternative weed control methods. These could include, for example, specially adapted 'blowtorches', hoes, and hot water; elsewhere, hand-weeding, strimming, and even electrocution have been proposed.
This announcement at the end of December 2015 came within days of a similar decision by Barcelona City Council.
Noting that glyphosate persists in the environment, pollutes water and is toxic to aquatic wildlife, pets and livestock as well as people, the Spanish city intends its glyphosate ban to be part of a high-quality, sustainable, ecological style of garden management.
Councils in both cities have given themselves a year to come up with the goods.
Edinburgh and Barcelona aren't exactly alone. France has banned the sale of glyphosate-based weedkillers to the general public. Paris, Chicago, Vancouver, the Netherlands, Denmark and Sweden have put restrictions in place. Back in 2014, Germany banned the use of some agricultural formulations which contain glyphosate formulated with other suspect additives on safety grounds [2].
OUR COMMENT
Bear in mind that glyphosate is the most-produced weed-killer in the world, not because of its ubiquitous use in public spaces and private gardens, but because of its use in agriculture for soil-clearance, pre-harvest crop conditioning, and more than anything else because of its use on glyphosate-tolerant GM commodity monocultures which are heavily in our food-chain.
Well done all those who are taking action to protect city-dwellers and gardeners from a carcinogen, and well done especially for refusing to swallow the industry spiel that glyphosate is safe so long as it's used according to their recommendations.
We need to protect ourselves from that same carcinogen in our food and in the feed of the livestock which become our food.
Since Town Councils are getting in the mood, ask yours for some protective action from the glyphosate in your parks and in your food.
[1] GLYPHOSATE IS A PROBABLE CARCINOGEN - May 2015
[2] GERMAN ROUNDUP BAN - November 2014